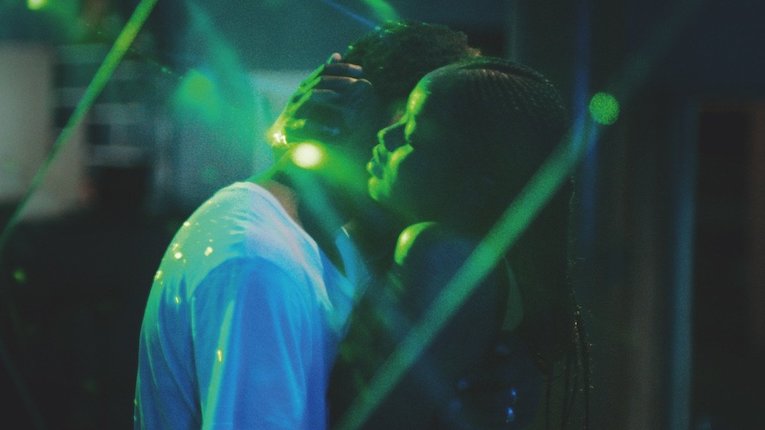 Why wait for all of the films on year-end best-of lists and award nomination slates to find their way to streaming services? Here are the ten best-reviewed films of the year that are available right now to watch on streaming services in Canada.

Trailer and reviews for Atlantics | watch on Netflix
Directed by: Mati Diop (played the daughter in 35 Shots of Rum by Claire Denis)
Notable performances: A cast of first-time actors including leads Mama Sané and Ibrahima Traoré
Honours & Awards: Le grand prix du Festival de Cannes 2019, shortlisted for 2020 Oscar for Best International Feature
Watch because: With The Irishman and Marriage Story consuming most of the oxygen around Netflix’s late-2019 releases, this instant classic of a film shouldn’t be slept on. (Don’t watch it just because Diop is the first black woman to direct a film featured in competition at Cannes, even though that is an important if belated breakthrough.)
Also watch: You can check out Mati Diop as the daughter in 35 Shots of Rum, which is now streaming on the Criterion Channel

Trailer and reviews for The Irishman | watch on Netflix
Directed by: Martin Scorsese
Notable performances: Robert De Niro, Al Pacino, but Joe Pesci swerves the hardest from previous roles and is rightfully racking up the award nominations
Honours & Awards: New York Film Critics Circle: Best Film, Best Supporting Actor (Pesci)
Watch because: Rather than a natural next instalment in the Scorsese cycle that began with Goodfellas and extended with Casino, Scorsese has concocted something that feels far stranger, and not just for the much-discussed digital de-aging.
Also watch: Netflix Canada currently has Scorsese’s Casino, The Departed, and, also from 2019, his music doc Rolling Thunder Revue: A Bob Dylan Story.

Trailer and reviews for Midsommar | watch on Prime Video
Directed by: Ari Aster (Hereditary)
Notable performances: Florence Pugh
Honours & Awards: Best Horror/Sci-Fi Film, Las Vegas Film Critics Circle; one of the National Board of Review’s Top Ten Independent Films of 2019; Breakthrough Performance (Pugh), Online Association of Female Film Critics
Watch because: Once you get past the fact that this film is neither as tight nor as multi-dimensional as Aster’s debut Hereditary, you’ll realize that this is a film destined for iconic status, with multiple scenes that will be permanent reference points.
Also watch: Hereditary is still streaming on Netflix.

Trailer and reviews for Apollo 11 | watch on Prime Video
Directed by: Todd Douglas Miller (Dinosaur 13)
Notable performances: Neil Armstrong, Buzz Aldrin, Michael Collins
Honours & Awards: It’s almost impossible to track how many Best Documentary, Best Editing and other awards this film is racking up.
Watch because: Perhaps it was only a matter of time before someone got the idea of getting into the archive of film and audio from the Apollo 11 mission, digitally restoring and editing it into a coherent document. You might think you’ve seen this story before. You haven’t; not like this.
Also watch: For All Mankind, the previous benchmark Apollo 11 doc, by Al Reinert, is streaming on the Criterion Channel.

Trailer and reviews for An Elephant Sitting Still | watch on Criterion Channel
Directed by: Hu Bo
Notable performances: Zhang Yu, Peng Yuchang, Wang Yuwen, Li Congxi
Honours & Awards: Best First Feature (Special Mention) & FIPRESCI Prize, Berlin International Film Festival; Audience Choice Award, Hong Kong International Film Festival
Watch because: “One of the most acclaimed feature debuts of the last decade, the first and, tragically, last film from Hu Bo, who took his own life at the age of twenty-nine, is a tour de force of existential fury and transcendent catharsis” (Criterion Channel). I’ve watched it twice and I find it hard to believe that it’s four hours long; there’s not a wasted frame in this riveting film.
Also watch: Along with his single magnum opus, Hu Bo has left us a short called “Man in the Well”, which Criterion is streaming with the feature.

Trailer and reviews for 3 Faces | watch on Criterion Channel
Directed by: Jafar Panahi
Notable performances: Behnaz Jafari, Jafar Panahi
Honours & Awards: Best Screenplay (Panahi) winner and Palme D’Or nominee at Cannes
Watch because: This is the fourth film that Panahi has made in Iran since the state officially banned him from filmmaking; each one has escalated in scope and ambition. “Defiantly modern in its liberating message about freedom of choice, it harks back to the great cinema verite films like Abbas Kiarostami’s The Wind Will Carry Us. Here, too, a man from the city travels to a remote mountain village on a mission that will plumb the depths of stifling traditional beliefs.” (Deborah Young, The Hollywood Reporter)
Also watch: The first of Panahi’s four banned films, This is Not a Film, was shot partially on an iPhone in 2011 and smuggled into France in a cake for a last-minute submission to Cannes. You can stream it for free with Hoopla if you have a card with a library that offers this service.