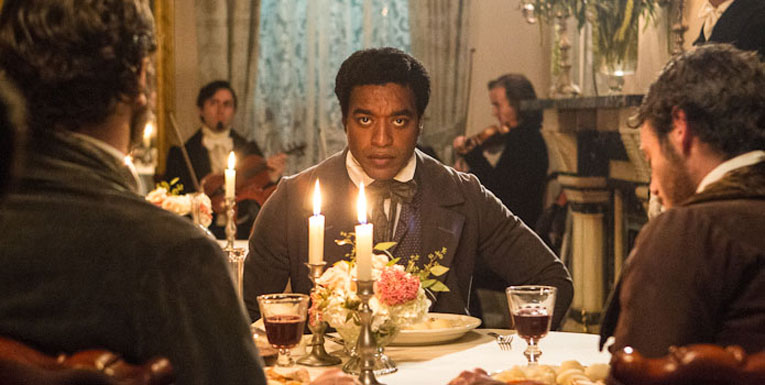 Posted at 20:25h in Festival Journal by james 2 Comments
Share

“The real model for this film is Quentin Tarantino’s Reservoir Dogs, with its relentless depiction of torture, along with every slasher movie that cloaks its intentions in a higher message. Violence has become the measure of verisimilitude. If it’s bloody, it looks real. This illusion allows us to enjoy what violence does provide: pleasure. If it weren’t so exhilarating, it wouldn’t be so popular.”

— Richard Goldstein, “The Backlash Passion: A Messianic Meller for Our Time”

Far be it from me to doubt the artistic merit of the film that delivers the best CGI-bloodspray-enhanced flogging scenes—money shots and all—since Mel Gibson’s cinematic milestone Passion of the Christ, but I think that the bandwagon now carrying Steve McQueen’s 12 Years a Slave to apparently inevitable Oscar glory will have to move on without me. There are several problems with this film but let me focus on three.

Bookish prose as film dialogue. Hey, there are no absolutes in film—what works in one might not in another, and so forth. But I feel the question of whether people ever talked in daily life like characters in Victorian fiction has been clearly settled on the “no” side.  So if you’re going to deploy that kind of prose as dialogue in a film, it’s bound to feel awkward unless it’s delivered with a kind of arch deliberateness.  I kind of think that the only way you can get away with that sort of thing now is as a kind of satire or possibly a kind of meta-commentary on the contents of the film.  But this film seems to think it’s being more historically accurate by taking unbelievably meticulously constructed lines of dialogue seemingly verbatim from the source text. The net effect for me as a viewer was to repeatedly push me outside the story.

Psychosis as truth. If this movie proves one thing it’s that Michael Fassbender is the new Al Pacino—a scenery-chewer for the 21st century.  His performance in this film, I will say, is quite remarkable.  But for me the whole character is utterly off-point. As David Cox has trenchantly pointed out in The Guardian, “The cause for which McQueen’s film fights, long ago prevailed. Now, its function isn’t to rub filmgoers’ noses in unacknowledged guilt; it is to let us bathe in self-righteous satisfaction at our moral superiority to our woefully benighted forbears.” And who better to serve as a fulcrum for this someone who is not, shall we say, an “average” or “typical” slaveowner (if he were, slavery would have been over in a generation because all of the slaves would be dead or disabled).  No, it must be an absolute sociopath/psychopath/monster.  This guarantees that we will learn nothing from this cinematic encounter with slavery.  I could branch out from this point to talk about how the movie in general has types rather than characters, but I’m trying to keep this list short.

Violence as truth. Steve McQueen seems to have one core aim with this film—to construct scenes of violence that the average viewer might well experience as some of the most shocking they have ever seen. This is how he cinematically makes the argument that slavery is the worst social institution that humanity has ever invented (and short of actual sociopaths who would ever disagree with that?). The intended effect seems to be that we come away feeling how excellent it is that the full truth of the terribleness of slavery has finally been presented in cinematic form.  Somehow the spectacle of extreme violence has become our contemporary guarantor of truth. That was real, man. That’s what it was really like. We learn nothing, we congratulate ourselves, we anoint our celebrity actors as culturally important. We shower awards. Count me out.