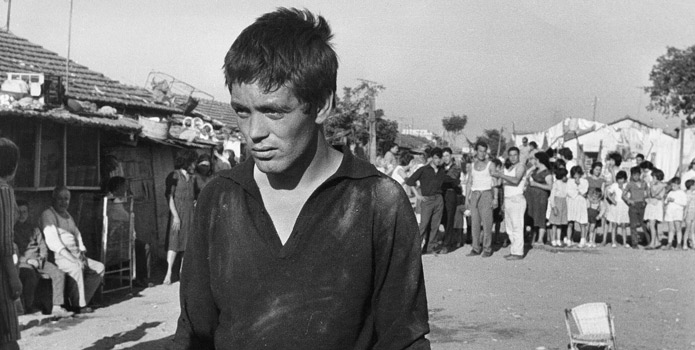 Tonight I took in the second screening in TIFF’s Pasolini retrospective at the Lightbox, and let me just say at the start that the new 35mm print looked great—far better, in fact, than even the fine Masters of Cinema Blu-ray release led me to expect. For a first feature, shot in a deliberately rough/ugly style—legendarily so—it looks quite beautiful up on the big screen, to my eye.

When I blogged about my first viewing of this film, on Blu-ray, I wrote “If you just want to watch his films, sticking to the more significant ones, I’d say you’re better off jumping in with Mamma Roma.” I’m now even more convinced that TIFF did exactly the right thing by programming his debut as a follow-up on the evening after his second film. I think that watching Mamma Roma, which is a step closer to mainstream film convention, can help teach us noobs how to watch a more abrupt, challenging film like Accatone.

Pasolini’s films are already, to borrow a phrase from Roberto Chiesi, “so foreign to the conventions of present-day cinema,” so most of us need all the help we can get.

One such connecting point that I noticed this evening was the revelation that Stella, the apparent innocent with whom the titular protagonist of Accatone falls in love, is the daughter of a prostitute. This forms a link back from, or a pointer forward to, the fulcrum of Mamma Roma‘s plot. If we haven’t seen the second film it seems like a simple bit of narrative colour but in the light of Mamma Roma it takes on much more significance and indicates that Stella is in a complex struggle between her past and her possible futures—mirroring Accatone’s own crisis.

On the technique level, I think about the reverse dolly shots during key conversations in Accatone, and how the similar shots in Mamma Roma take on a more choreographed/consciously-artificial feel, almost like a musical without songs—a move that serves to emphasize how these scenes are elucidating the inner conflict of the protagonist. In Accatone the reverse-dolly shots seem to part of a more realist, filming-in-place aesthetic, but if you’ve seen Mamma Roma first you’ve been trained to understand these scenes as containing key information about the characters.

The first time that I watched these two films, I was much more enamoured of Mamma Roma than of Accatone. After tonight, the latter film, Pasolini’s harder-to-appreciate debut, has risen substantially in my estimation. After my first Blu-ray viewing, I felt I understood why Fellini didn’t appreciate it, but now after my first big-screen viewing, I understand why so many other people did.