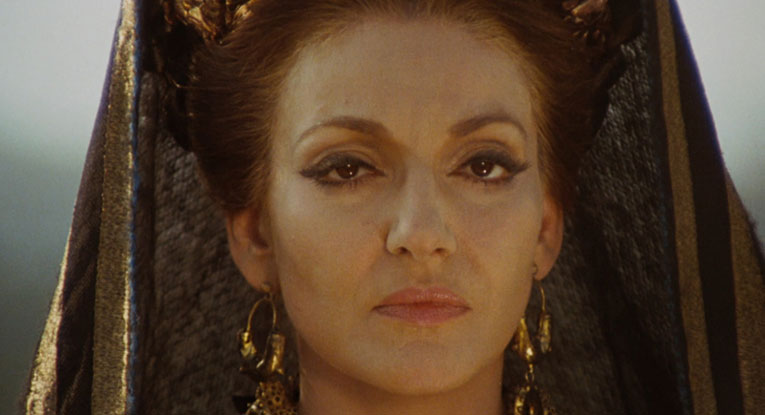 On my first attempted viewing of this film, I was reminded of a choice Lem Dobbs line delivered with laconic perfection by Bill Duke in Steven Soderbergh’s The Limey.

Maybe I went into this one feeling a little too cocky, feeling like I’ve seen enough Pasolini now that I fundamentally get him and can figure out what he’s doing, no matter how difficult the film. If I was seriously thinking that, well, that was a silly thought.

But I’m pretty sure that the reason I had trouble with this one was not really a matter of a radical shift in Pasolini’s approach. Instead, it had everything to do with the source text, and my complete lack of familiarity with it.

This is the kind of literary adaptation that is quite simply not made anymore—the kind that assumes that any audience interested in viewing a film of this story is going to be already familiar. In fact, Medea assumes even further that viewers are so familiar that the film can jump right into a kind of theorizing about the cultural meaning of the story, and dwell there for a good 45 minutes without even really starting to unspool the events of its most famous version—the play by Euripides.

So, I did what any self-respecting, not easily defeated, Pasolini devotee in training would do. I went and read a translation of the Euripides play, and then I watched the film a second time.

Unsurprisingly, the film was much more comprehensible on second viewing, and I can even say that I admired it—but I did find it to be his weakest film so far. Stylistically and methodologically it does feel like he is beginning to repeat himself here—not doing a lot that Oedipus Rex, for example, didn’t do better.

I will say that I totally get Pasolini’s casting of Maria Callas. She brings just the right authenticity and presence for the title character. Also, points to the BFI for a beautiful representation of the film on Region 2 BD. It’s a real shame that there isn’t a high def release of this film for the North American market.

My new go-forward plan—seeing as the next 3 of Pasolini’s films, his Trilogy of Life, are all adaptations—is to do advance reading before watching the films. I’d rather enjoy the films as they were intended to be seen—visualizations and interpretations of familiar narratives—than to make awkward attempts to appreciate the films while lacking necessary context and preparation.