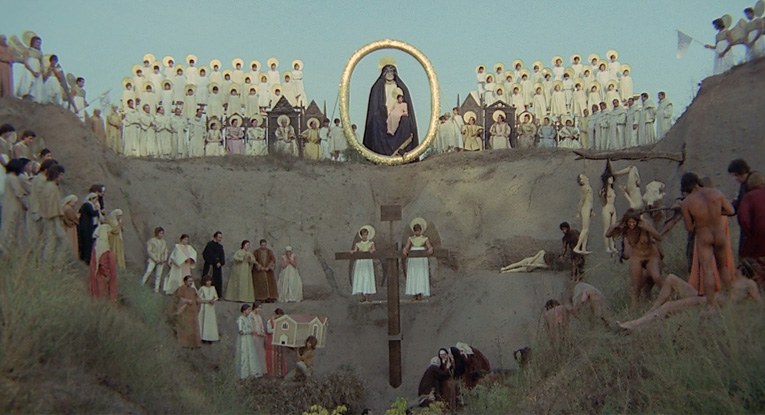 In the Decameron I filmed the way I know how: more than ever in my own style. But while in Porcile and Medea my game was atrocity, now strangely it’s happiness. A happy work (made with great seriousness, of course) seems to me to contradict all expectations. It’s complete disobedience. (But maybe I’m lying.)

Making the decision to read Pasolini’s source texts before viewing each of his last four feature films, all of which are literary adaptations, rather derailed, for a while, my plan to watch all 13 features in the space of a year or less. Rather than charging straight ahead from Medea to The Decameron, I took the time to read all 800 pages of the McWilliam translation/Penguin edition (and posted a brief review). I probably could have prepared just by reading the 10 stories of Boccaccio’s 100 that made it into the movie (helpfully listed by Wikipedia) but it’s a work I’ve long been wanting to read and I wanted to soak up the flavour of the entire text.

Finishing the book, and the timing of this ensuing Blu-ray screening (I viewed the BFI’s UK release—I’ll get around to the Criterion edition as well at some point), delightfully coincided with the opening of the Dalhousie University Theatre Department production of Patrick Baliani’s stage adaptation, which I took in last night.

Baliani’s play is almost the direct opposite of Pasolini’s film in theme and, to some degree, in tone—fascinating to see the degree to which readings of Boccaccio’s text can vary. Let it be said that the current crop of Dal Theatre students are a game, talented crew of performers who gave Baliani’s version a energetic workout, to say the least. But in the Baliani play, the background of the bubonic plague weighs heavily on the proceedings. Where the book is mostly diversion and escape, the play is weighed down with constant reminders of doom.

The play makes much of the tale of the scholar’s revenge—the perhaps-autobiographical revenge fantasy that others might suggest is both ethically problematic and a poor fit with much of the rest of the work. The ethical problem is countered partly by finding an improbable ray of hope at the end—a twist which diverges from the source text completely. For his part Pasolini didn’t include it amongst the nine tales that he chose, and in fact, there are only two tales that show up both in the Baliani play and the Pasolini film.

The Decameron itself is, needless to say, a challenging text for adaptation to any visual medium. As a lengthy collection of a hundred stories, most without overlapping characters, the main decisions are which small fraction of the stories to include, and what to do with the narrative framing device.

In the book, 10 young Florentines try, in the summer of 1348, to escape from the Black Death that is sweeping their city. They take turns each day in their country estate retreat MC’ing a round of story-telling, so that each of 10 days, each of the 10 plague-refugees tells one story. The Baliani play uses the group of young people to both tell and enact the stories, blurring the lines deliberately between those roles, while Pasolini’s film jettisons the framing altogether, relying on 10 original linking scenes that include dream sequence animations of paintings and a kind of framing story involving a painter (played by Pasolini himself), and an overall consistency of tone and visual expression to create something that feels more unified than the the typical anthology film.

In reality I was not just having fun with this film. I understood something very simple that it had taken me ten films to understand: namely, that cinema is a game… I’ve discovered play.

Even when Pasolini is playing he is doing so with rigour—in this film it is his way of insisting on what seems to me an essential quality of the source text. Boccaccio’s stories, for the most part, have a very un-fraught and down-to-earth way of presenting sexuality, and Pasolini insists on being cinematically true to that. In the story of the young man who pretends to be a mute in order to secure work and residence at a convent for the purpose of regular intercourse with the nuns, we get a scene with a young, sex-curious nun pulling up her skirt and giving him the wave-in, as we say, cutting to a head-on shot of his nude, tumescent member—yep, Pasolini sees no reason to flinch from the nun’s-eye-view of a naked boner (1971 seems like another world, now, doesn’t it?). But at the same time the film has really very little in common with porn as it is produced now—what the sexual scenes all have in common is a kind of innocent glee. They are well-lit to establish a joyful, carefree tone rather than to provide pornographic inspections of anatomy and sexual mechanics.

Pasolini, in this film, provides some flashes of mortality and doom around the edges, here and there, without reversing the overall direction and tone of his source text. It must have seemed a very daring film in 1971, and in some respects still seems today—but other than by its choice of stories it doesn’t seem to have the least bit of interest in correcting Boccaccio, or reading him against the grain. It is a cinematic argument that Boccaccio is forever contemporary, and in its own way I feel, on first viewing, that this film earns its own lasting relevance.