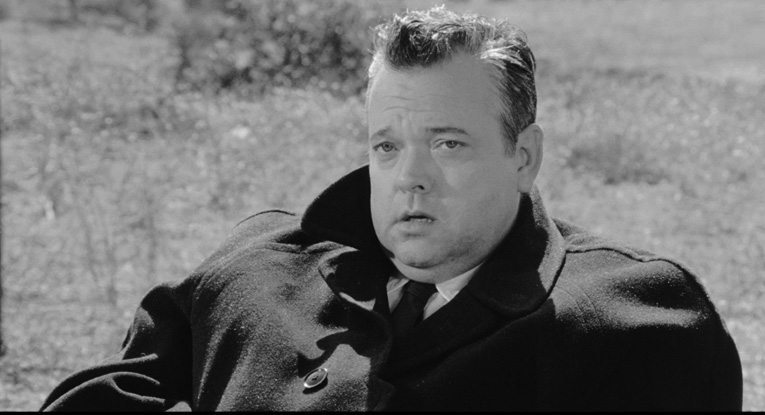 One of the lesser-known oddities in the Pasolini oeuvre is his short film, “La Ricotta,” his contribution to the 1963 anthology/omnibus/portmanteau film Ro.Go.Pa.G., which also featured segments by Roberto Rossellini, Jean-Luc Godard, and Ugo Gregoretti. Pasolini’s segment is by far the strongest (“Il Nuovo mondo” plays like a parody of a Godard film, Rossellini’s “Illibatezza” is, frankly, dorky, and “Il Pollo ruspante” was responsible, I’m pretty sure, for killing Gregoretti’s short career as a director). “La Ricotta” is an admittedly somewhat heavy-handed satirical piece starring Orson Welles as a self-important, intellectual film director—Pasolini having some fun with his own image—making a film about the passion of Christ.

Yes, Pasolini satirized the act of making a Jesus biopic before doing it for real (The Gospel According to Matthew/Il Vangelo secondo Matteo followed next in 1964), and as “La Ricotta” demonstrates, took great delight in creatively and jarringly mixing the sacred and profane. Pasolini was tried in an Italian court for this film’s “outrage against the established religion” and received a three-month suspended sentence, later overturned on appeal. The film’s release was delayed but eventually allowed with significant cuts.

Ro.Go.Pa.G. was released (can we assume, intact) on a fine Blu-ray/DVD dual edition by Masters of Cinema this past August. I can recommend it strongly even in the absence of extras (other than a trailer), for its excellent image quality.

My absolute favourite moment features a reporter asking the film director character if he ever thinks about death. “As a Marxist, I never give it any thought,” deadpans Welles. Perhaps a not-so-sly way for Pasolini to indicate his self-awareness about the limits of materialism.

The first couple of times that I saw Pasolini’s third feature The Gospel According to Matthew (also released in 2012 in dual format by Masters of Cinema) I wasn’t aware of this back-story, but as I recently watched his Palestine location-scouting documentary Sopralluoghi in Palestina (included as an extra on the latter disc) suddenly this gay, Marxist atheist’s desire to prove himself capable of a sober treatment of Jesus made a lot more sense to me. The film documents how Pasolini toured around Israel & Palestine and eventually, disappointedly came to the conclusion that he couldn’t film Il Vangelo there.

In the opening scenes I was perhaps surprised to see that Pasolini’s location expert was not a scholar of ancient history per se, but rather an ordained Catholic priest. But as the film rolls on, an interesting dialogue and dialectic unfolds between the two principals. It is nothing as “spontaneous” as today’s shot-on-video reality docs but it does, to an interesting extent, explicate how Pasolini came to direct the film as he did. And along the way it has some interesting things to say about why we cling to ideal images, and what brings about our disillusionment.