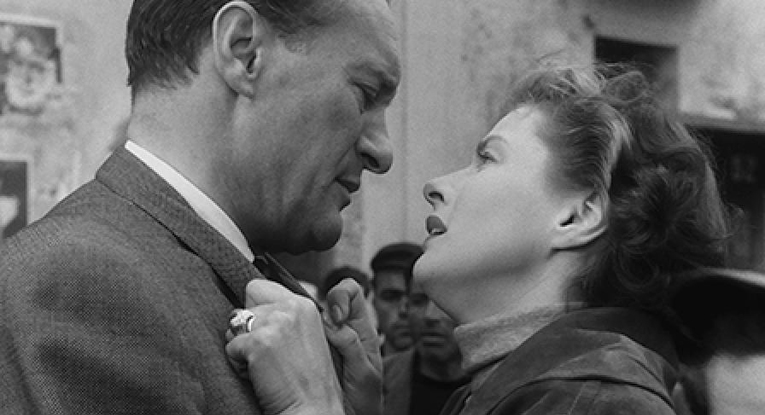 23 Nov Blu-ray diary: Criterion’s Rossellini+Bergman package might be the best box set of 2013

A ball started rolling for me when I saw that restored print of Rome, Open City at TIFF in September. It was the first Rossellini film that I’d ever seen and I found it simply devastating —a much more harrowing, yet illuminating, emotional experience than I’d expected.  In October, on the strength of that film alone, when Criterion had a brief 50% off sale, I decided to blind-order the 4-disc Blu-ray set 3 Films by Roberto Rossellini Starring Ingrid Bergman. I started with Stromboli (the English-language version), which I found to be a raw emotional experience in a much different sense, and I didn’t really know, at first viewing, what to make of the abrupt turn to God in the closing sequence. But then I started to watch Europe ’51, and that was went I fell off some kind of cinematic cliff. The film immediately turned me into an Rossellini obsessive.

Both of these films come in this set in alternate English-language and Italian-language versions. As the English-language versions are in better visual condition, and seem to be generally preferred, I started off watching the English cut of Europe ’51. But I quit that cut an hour in, impatient with the way that English dialects and accents were matched to various characters (British accent for the intellectual journalist, Brooklyn for the peasant mother of 6 children). I started watching the Italian version from the beginning and quickly realized the profound changes that had been made. “Are you a communist?” had become, in the English version for the US market, “are you a member of a political party?” The public, social schism in post-war Italian society between West and East, Catholicism and Communism, had been censored nearly out of visibility in the film.

There is a fantastic 37-minute interview with film historian Elena Dagrada on this disc, that explicates very well the changes that were made, and the reasons for them (as well as a written piece by her in the accompanying booklet that talks about the changes between versions of Stromboli). I watched this, but not before going back to watch the rest of the English language version after completing my viewing of the Italian version. Though in the case of Stromboli I will readily concede the superiority of the English version, I think I find myself against the grain of common opinion on Europe ’51—I greatly prefer the Italian version.

Other highlights of the special features:

I think I was somehow aware of the deep influence of these films on subsequent films and directors—especially Antonioni and Godard. But now this incredibly important point in film history has been crystallized and explicated for me. My film horizons have been expanded—Criterion has bottled lightning with this release.