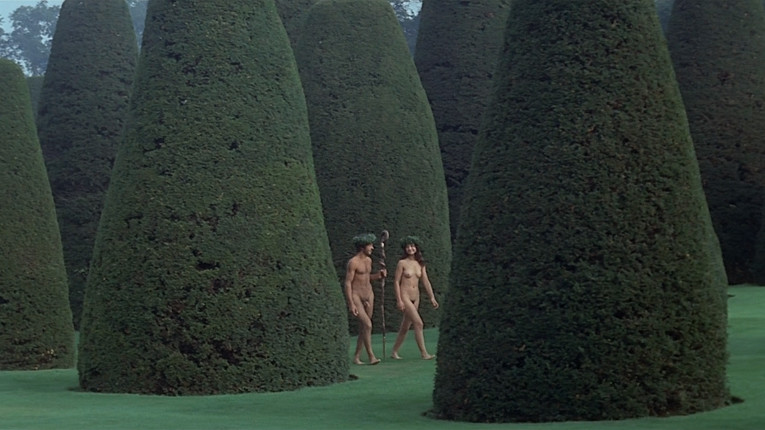 I’m feeling a bit silly and regretful. If I had my Pasolini watch-through to do over again, I never would have let myself get knocked off course by the impenetrability of his Medea, which made me back up, read the play, and then watch the movie a second time. Based on that experience, I decided to read each of the source texts for the Trilogy of Life (The Decameron, The Canterbury Tales, Arabian Nights), and then at least part of the multiple sources of Salò, before attempting the films.

Reading The Decameron was pure enjoyment but it took a long time, and although I got a start on re-reading The Canterbury Tales, which I hadn’t touched since painfully, slowly making my way through portions of the original text as an undergraduate, I fell off the wagon, and so did my Pasolini viewing project.

This week I decided to just take the plunge and watch Canterbury, Arabian Nights, and Salò, and I now realize that my fretting and delay was all for naught. The films are all, like Decameron, perfectly comprehensible without knowledge of their sources. It’s now clear to me that Medea is an outlier in the Pasolini oeuvre. Yes his films are intellectual rigorous, yes they display a supreme cinematic intelligence, but Pasolini never talks down to the viewer, and is never willfully obscure. Knowing what I know now about his films, my advice to the first-time viewer is this—with that one exception, you really don’t need to know the sources to enjoy and grasp any of his literary adaptations, so just go ahead and watch them already.

That advice goes double for The Canterbury Tales, which moves with a breezy delight that belies its rigorously-conceived underpinnings. If Pasolini’s was a painterly approach to filmmaking, then the middle film of the trilogy represents his quickest, tightest, and surest strokes.

That extends to his self-casting as Geoffrey Chaucer, on which he commented: “As an actor, I had decidedly more fun in this role than as Boccaccio’s Giotto, who’s always so worried about his work… Here I joke and mock my own human ‘inventions.'” In fact early reviews were not favourable to this portrayal, which was seen as not representative of the range of tone of the original works. But his choice to shape the character and the work to his own purpose has been largely validated by critical consensus over time.

With the whole Trilogy, and especially with this film, Pasolini was creating images of sexuality that were simultaneously daring in their explicitness, polymorphous in their content, and innocent and playful in tone. Thus it was extremely disappointing for him when the success of the films led to a whole new exploitation subgenre that was predicated on the perception of his films as being lurid and transgressive—as detailed in the excellent 36-minute documentary Pasolini and the Italian Genre Film, included with the BFI Blu-ray release of this film. 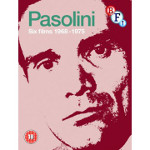 I’d be remiss if I didn’t mention the release, a couple of weeks ago, of the new British Film Institute box set of six Pasolini films on Blu-ray. I can recommend it without reservation even though I won’t be purchasing it myself—it simply collects the six of his films that the BFI has already released on Blu-ray disc, five of which I own already (the sixth, Salò, I have in its Criterion release, but will likely double-dip for at some point just to lay my hands on the additional special features). If you love cinema, and you don’t own these already, and you can play Region B Blu-ray discs, you need this, it’s as simple as that.