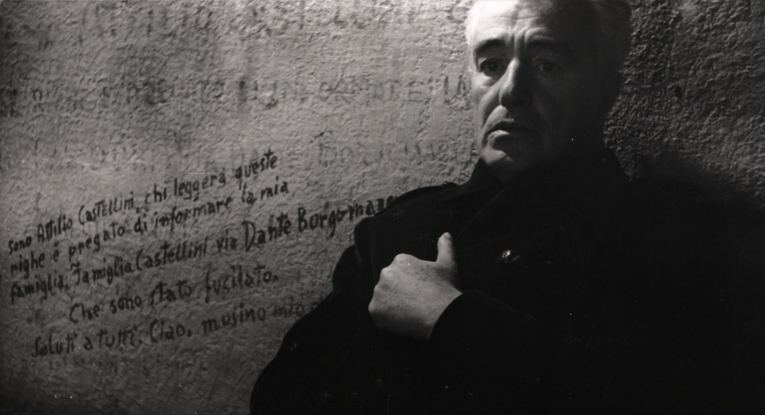 In case it wasn’t obvious from my last post, I seem to have a new addiction and it’s the films of Roberto Rossellini.  At the moment the more formalist auteurs seem like weaksauce to me compared to the way that Rossellini challenges and reconsiders formal considerations at every step of his filmic development, or so it seems to me now that I’m about six films into his filmography.  But what’s interesting to me about Il Generale Della Rovere, which was released for the first time on Blu-ray just last week (in a fine package by Raro Video), is that it seems as likely to be misunderstood now as it seemingly was on first release in 1959.

A condition laid down by the film’s producer was that it should be ready for the Venice Film Festival in the fall of that year. This led to the film being shot in studio—Cinecittà in Rome, as it happened (on the legendary soundstage Teatro 5, where Fellini made several of his films). Rossellini, starting with Rome: Open City in 1945, had been associated more than any previous filmmaker with the use of location shooting to bring a feel of verité to his films. For Il Generale he decided to embrace the artificiality of the studio environment and, in fact, play it up.  His approach seems, however, to have been too subtle for reviewers at the time, who wrote of his “return to realism” in response to this film.  His deliberately contrasting of newsreel footage and studio shots with (obvious to later viewers) painted and matted-in backdrops seems to have not had the intended effect.

I tend to think that today’s viewers might watch this film and see those abrupt shifts as poor workmanship rather than deliberate aesthetic.  We have had so many subsequent generations of filmmakers that have embraced conscious artificiality and refined it in various ways such that what was once a bold cinematic experiment might play more like a clumsy misfire. But understood in context it is another fascinating chapter in Rossellini’s development.

I continue to find compelling the complex edition history of Rossellini’s films, and this package offers another chance to explore that aspect of his filmography.  The disc contains both the director’s cut that was presented at Venice 1959 and the later theatrical release that was edited in various ways. Once again it is worthwhile viewing both versions as well as the visual essay by leading Rossellini interpreter Adriano Aprà that meticulously glosses the various changes. To summarize: most of the nips and tucks of the theatrical version constitute indisputable narrative improvements, but one of the most significant cuts in that version is baffling unless you’ve seen the director’s cut.  For this reason that earlier festival version is the default version presented from the main menu of the disc. The theatrical version is available in the bonus-feature submenu.

One more note: Raro have decided to present this in an archival framing—exposing the rounded corners of all of the exposed filmic image,  rather than matted/cropped presentation that filmgoers would normally see (and which we most often see in video transfers). I’m fine with this presentation—considered in Blu-ray.com’s detailed review—but others may find it a bit strange. Otherwise, Raro Video clearly have been influenced by Criterion in their production of the special features on the disc as well as the accompanying booklet (with excellent Aprà essay)—the resulting package is not quite as slick as the current Criterion standard, but more than worthwhile nonetheless.  We’re indeed lucky that 2013 has seen not one but two excellent Rossellini high def releases.