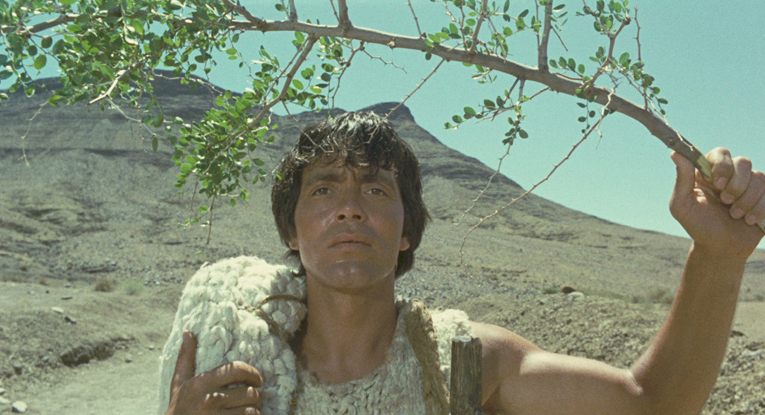 10 Feb Blu-ray diary: Oedipal, but not so complex (Pasolini 5: Edipo re)

So it seems that cinema must be naturalistic…

I want to stress the fact that now, at forty-five years of age, I have emerged from the wilderness of Freudian and Marxist dogma. But where have I got to?

Colour! After experiencing six black & white Pasolini films in a row (four fiction features as well as two documentaries), colour comes as a revelation. Like Antonioni, with his first colour film Red Desert three years earlier,  Pasolini deploys colour masterfully in his first use, albeit with less overt symbolism than Antonioni. In Oedipus Rex Pasolini seems more interested in the way that it can create mood, tone, context.

It’s worth mentioning how excellently the colour is conveyed by the recent Masters of Cinema Blu-ray edition. I feel lucky to be having my first experiences of most of these films in such high quality versions.  It makes a big difference.

For a film about the Oedipal myth, with all of the Freudian baggage that might entail, Pasolini has created a remarkably unschematic, flowing narrative, at least when compared to his earlier films. Perhaps it helps to know the Sophocles play, but the narrative logic is pretty clear, I think, whether or not you’re familiar.

The opening scenes depicting the birth of Oedipus as a child in pre-way Italy are brilliant, and perhaps helped inspire a similar sequence in Terrence Malick’s The Tree of Life.

But for me the most masterful sequence is the patricide/regicide of Laius, which Pasolini rightly makes the centrepiece of the film. He finds a way to stretch the scene out, without it ever feeling stretched, and to make it visceral rather than grandiose. It won’t seem “naturalistic” to those over/exposed to the “realistic” and/or cartoonish excesses of today’s violent films, but it is, relative to his previous films. And it demonstrates that Pasolini could, indeed, do suspense.

I’m inclined to think that not just The Gospel According to Matthew, but also this film, left a lasting impression on Martin Scorsese and led him to film The Last Temptation of Christ around ruined/ancient structures, rather than constructing elaborate sets. I have to say that I’ve found this choice a bit distracting in all of these films. Filming in and around crumbling ancient edifices makes the settings “feel” old I suppose, but of course in the ancient time that these films were set, some of the buildings around them would have been new. Pasolini perhaps sensed this possible criticism and claimed that he was setting Oedipus Rex “outside of time,” and indeed he found ways to make the ancient-time portion of the movie (most of it) cultural neutral or at least hybrid.

It has to be said that Pasolini is so unflinching about the mother-love aspect of the myth/story that it seems nowhere near as horrifying as the patricide sequence. Silvana Mangano’s Jocasta handles everything with such equanimity (and is not shown mourning the death of her husband Laius) that her end comes rather abruptly.

One more thought about the problems of depicting myths naturalistically. The age of CGI has inflated audience expectations about what can be depicted visually, and has inflated narrative itself along with it. All of that externalization, rendering-as-surface, may work against the original function of such stories, becoming merely a distraction from the reality of the gods and monsters within. As Pasolini’s carnivalesque sphinx says to Oedipus before it is slain, “The abyss you thrust me into is inside of you.”