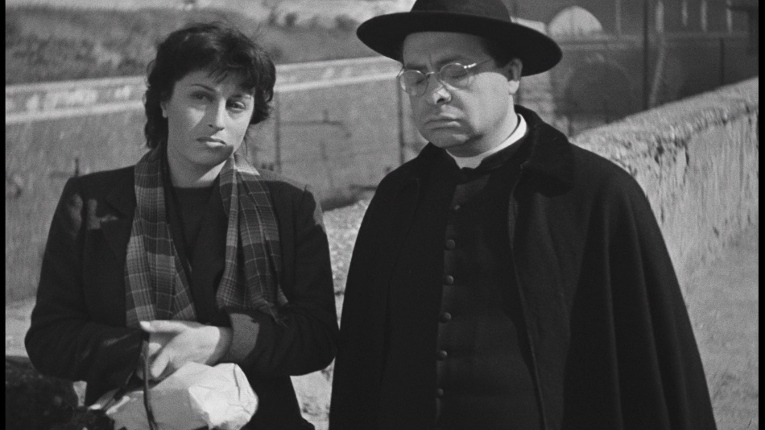 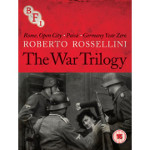 Film disc collectors often talk guiltily, or regretfully, or occasionally scornfully, about “double-dipping”—buying a new Blu-ray edition of a film previously purchased on DVD or on an inferior Blu-ray. But if there was ever a case for it (as well as for owning a multi-region player), it’s this brilliant new Region “B” numbered edition of 3000 from the British Film Institute.

The restoration work for the films transferred here was performed, as one might expect, by the nonpareil Cineteca di Bologna, in 2013, and the image is a substantial upgrade, as you can see in the comparison screenshots in DVD Beaver’s review. What you can’t see is the even more remarkable improvement in sound. I did a little toggling between this edition and the Criterion DVD set from 2010, and the audio restoration is a massive step up in fidelity and clarity.

Because Rome, Open City is important not just to film history, but to history in general, and likely because it is more conventional than Paisan or Germany Year Zero in its construction, it has tended to overshadow the other two films. And yet the latter two are more representative of Rossellini’s particular genius. So the presentation on these discs perhaps levels the playing field, allowing all three films to be better appreciated as the masterpieces they are.

What makes the 2010 Criterion DVDs still worth having is the incredible forest of extras, several hours’ worth, which really help to illuminate the films and their context.

The BFI Blu-ray set brings forward perhaps the best of these—a half-hour visual essay about the entire trilogy by Rossellini biographer Tag Gallagher called “Into the Future.” It also has two features that the Criterion box lacks: a 2005 documentary Children of Open City in which Roma: Città Aperta lead kid actor Vito Annicchiarico, nearly six decades on from the film, goes on a surprising journey of reminiscence, and, remarkably, a freshly restored transfer of Rossellini’s Amore (1948), a two-part anthology film that showcases the incredible acting talents of the great Anna Magnani. The first part is from a play by Jean Cocteau, and the second is scripted by, and features an appearance by, Federico Fellini, complete with a remarkable blond dye-job.

While the 2010 DVD box is being target-marketed to me via Facebook for “only” $69 at amazon.ca (before tax&shipping), the new BFI box came from Amazon UK for $56 all in, thanks to the continuing relative strength of the Canadian dollar against the UK pound. (Canadian collectors note: Amazon UK is a fantastic source of Blu-ray deals, especially, but not only, if you invest in a multi-region player.)

So, the Criterion box may be the winner on extras, but if you want the most pristine presentation of these historic films, the new BFI box is a slam dunk. The time may come when Criterion releases a set that combines the best of both, but in the meantime, this is the Blu-ray release of 2015 so far.