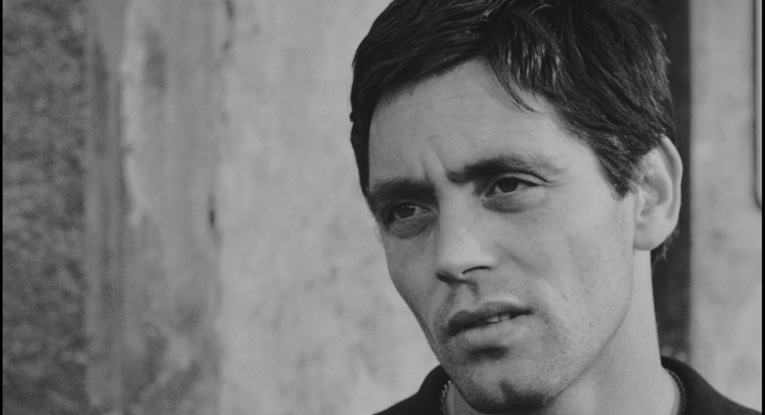 So I have a little cinephile project on the go. I intend to watch all 12 of Pier Paolo Pasolini’s feature films, over the next four months or so.

(There is an ambitious version of this project, which is probably not going to happen this year, where I also invest many hours to read all seven of his major source texts: the Gospel of Matthew, Sophocles’ Oedipus the King, Euripides’ Medea, Boccaccio’s Decameron, Chaucer’s Canterbury Tales, The Arabian Nights, and de Sade’s The 120 Days of Sodom.)

Naturally enough I decided to start at the beginning with Pasolini’s 1961 directorial debut, Accatone, which made its Blu-ray debut on the Masters of Cinema label in March of this year (which edition, like most from MoC, is locked to Region B).

I will be perfectly honest here and tell you that things got off to a bumpy start. Perhaps I was a little too cocky, diving in at the deep end. Even watching the first scene I was having trouble figuring out who was who and why people were saying the things they were. By the last half hour of the film I was really starting to check out.

I found that other Italian master of oblique cinema, Michelangelo Antonioni, rough going at first, too, until I figured out what was throwing me off—his habit of cutting from one scene to another with no transitional cues.

Antonioni followed this practice rigidly, find it to be the most natural or honest way to construct a film, but the end result for me as viewer is that sometimes a scene will progress for some time before I realize that the location has changed and time has elapsed. For me this is 90% of the reason why his films can be considered difficult.

I conquered this by simply giving myself permission to stop and rewind at will in the middle of watching, until I’m absolutely clear where all of the scenes start and end. It’s a little more demanding than just sitting and watching, but the end result is that I’m able to “get” his films on first viewing.

Pasolini’s Accatone, I discovered, has more difficult aspects to its construction than even Antonioni’s films. I had real difficulty keeping track of some of the character relationships and even who we are seeing at given moments.

What saved me this time was the extremely helpful critical commentary by Tony Rayns. He is very good at sorting out which difficulties are a result of deliberate aesthetic choices by Pasolini, and which are just the result of inexperience by the director.

Perhaps the most valuable thing that he points out is that Pasolini simply avoids wide shots and, crucially, establishing shots, as part of his reaction against neo-realism. He would rather his film construct its own reality, rather than to create the “effect” of “naturalism,” which he had come to see as false.

The net result of this in technique is a lot of tight shots, the camera always on the speaker.

During late sequences of the film, some time after a scene that only briefly establishes that the police are investigating the titular protagonist, we get occasional cuts to a pair of eyes. The view is meant to infer from this that Accatone is under police surveillance, but without the commentary’s help I didn’t make that connection. It’s important to undestand this because it makes the film’s ending seem much less arbitrary.

Rayns also helped me understand that while Pasolini does throw the viewer into various scenes without the help of any establishing shot, he tends to present matching scenes later on, illuminating by sheer repetition the significance of the locations and people, and expressing the development of the narrative by the differences between the scene “versions.” Once you understand this the film is a lot less confusing.

But for all that, the film is still a bit of a mess, if an inspired one. I can’t really recommend Accatone on its own as a starting point for Pasolini—although watching this new Blu-ray with the commentary on is actually a great introduction. If you just want to watch his films, sticking to the more significant ones, I’d say you’re better off jumping in with Mamma Roma, which I will consider next.