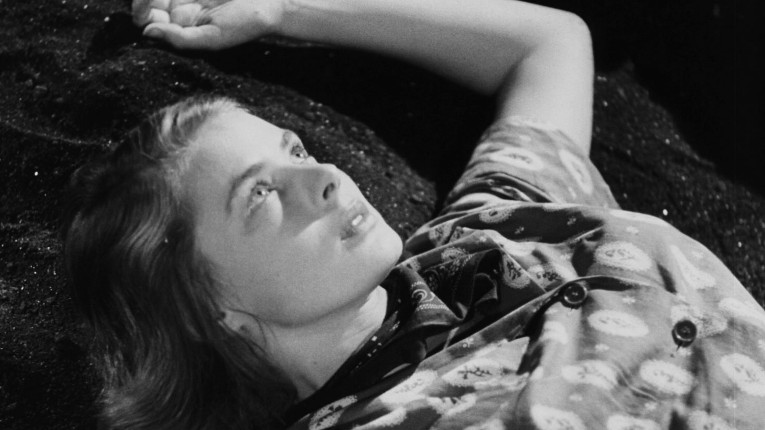 For the 100th anniversary of Ingrid Bergman’s birth—my 100th blog post. Thanks to all my readers and for all the positive feedback I’ve received in the past three years. I just re-upped with my hosting service so I guess you’re in for another year of this… 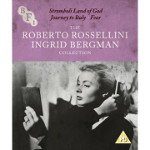 This is the second three-disc Blu-ray set of Rossellini films from the British Film Institute this year, following on their excellent War Trilogy release. Criterion was of course the first to release a box set of Roberto Rossellini’s films starring Ingrid Bergman, and that release was so brilliant that I proposed it as the best of 2013. That Criterion set is built around three features: Stromboli, Journey to Italy, and Europe ’51, whereas this new BFI box offers Stromboli, Journey to Italy, and Fear.

About Fear. My first impression was that it’s rather fascinating to see Rossellini essentially doing a Hitchcock-style film (if slightly German-expressionism-inflected) starring Ingrid Bergman. But I have to admit that my interest flagged a bit in the second half hour. I’m so attached to Rossellini’s rough-sketch approach to filmmaking that the smoother Hitchcockian feel began to make me sense something missing—until the Big Twist happens an hour in, one that is so emotionally brutal that it feels genuinely dark in a way that the more aestheticized Hitchcock rarely manages to touch. However—hopefully I’m not giving too much away—as with Journey to Italy, the closing scene turns away from that darkness in a way that will feel overly abrupt to viewers not used to Rossellini’s rhythm. My single reservation: with its German cast and aesthetic touches, I would really like to see the German cut of this film, and I imagine I would prefer it to the English. But this restoration is flawless, and the film is unique in the Rossellini oeuvre, so once again, props to the BFI for making it available.

Rossellini directed five feature films starring Bergman—the fifth, Giovanna d’Arco al rogo / Joan of Arc at the Stake, is really a filmed stage play performance and is not included on either box, and in fact was not included in the ten-film “Projetto Rossellini” restoration project that was recently undertaken by the Cineteca di Bologna. You have to concede that Criterion went the extra mile by including Europe ’51 (my personal favourite of the four Rossellini-Bergman feature films I’ve seen) in two restored versions, whereas the BFI has simply included the three films that were restored as part of the Projetto.

So, to double-dip, or not? Does the BFI’s box offer enough additional value to justify a second, overlapping purchase? Apart from Fear, here’s what it offers that the Criterion set does not:

Bottom line: If you’re even half as much into Rossellini’s films as I am, you want this—an essential purchase for any serious collection.