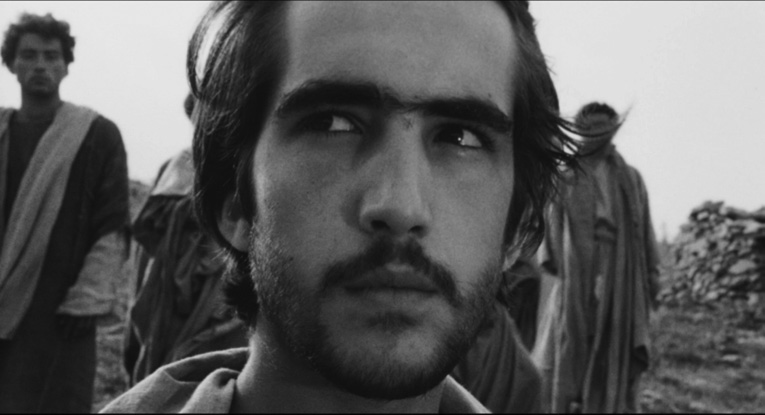 “It won’t be a mainstream film in the common sense of the word, because this story doesn’t give anything to the audience, but… I’d like to say that it’s a story that gives everything by giving nothing.”

Judging from any number of reviews, blog posts, and comments that one reads online, Pasolini’s third feature film, The Gospel According to Matthew, is at least as baffling to, and misunderstood by, contemporary viewers as it has ever been.  For various reasons, it seems to confuse believers and non-believers alike. And yet with a few clarifications, and some brief context, I think it can be made much more accessible.

Pasolini made two very interesting choices with this film.  The first was to film just one of the gospels, rather than following the typical Jesus-film path of attempting to harmonize the four accounts, something that people have been trying for about, oh, 1850 years.

Pasolini has his own reasons for this choice but it’s interesting to note that until the modern period it was the most influential gospel. The fact that it rendered the Gospel of Mark superfluous, by containing almost all of it, played into this, as well as traditional placement as first in the canon (even though GMark was older). An additional factor was its alleged authorship by Matthew himself, one of the first followers of Jesus.

Masters of Cinema, who issued a fantastic Blu-ray/DVD combo edition (Region B locked) of this film last March, have made it a point of emphasis that they have changed the English title from that of its previous cinematic releases—The Gospel According to St. Matthew—to precisely translate the Italian title as The Gospel According to Matthew, without the “Saint” honorific. Their notes on their website as well as on the first pages of the packaged booklet quote Pasolini as having been caused “considerable anguish” by the pious addition to the English title.

But—and this is mostly a side point—the anguish (and the correction) do seem like misplaced emphasis when you consider that scholars, Christian and not, have recognized since the 1600s that Matthew wasn’t the author at all.  The fact that it is an anonymous text did not keep it from being associated, from a very early date in Christian tradition, with one of the first apostles, but the fact is, calling the author “Matthew” is really just a convention, in textual history terms. But Pasolini seems to have quite unaware of gospel scholarship in general, and his Vatican adviser, with whom he is seen touring Palestine in Sopralluoghi in Palestina, seems to have been rather conservative even in terms of Catholic scholarship.

This side of Pasolini that seemed to want to pay some homage to church tradition has perhaps led him to the second interesting choice, which was to limit all dialogue to lines found verbatim in the text. Since the Gospel was not written as a drama per se, this leads to various challenges that can seem a bit clumsy, including actors attempting to emote what they aren’t allowed to say.  One person’s rigorous minimalism can be another’s awkward over-acting, I suppose.

So, both of these choices function as boundary setting within which Pasolini, who prefers his aesthetic choices to have a certain rigour, tells one evangelist’s story.  Within these strictures he allows himself considerable freedom, as we shall see.  The additional move that he makes in terms of structuring is to divide the story into three acts.

Because of these minimalizing choices I think the opening act can be difficult to follow whether or not one is generally familiar with the story of Jesus. There is no annunciation of the coming birth to Mary, no Bethlehem inn, no stable, no manger, no shepherds come to worship. That is because all of those elements are found in the Gospel of Luke, not Matthew.

But even the uniquely Matthean elements of what we now call the Christmas story are altered in various details. There is no visual following of the star, no settling of the holy family in Nazareth. The family leaves to hide Jesus in Egypt on the advice of the angel, but in this rendering does so in broad daylight rather than under cover of night.

What is more, because Pasolini doesn’t permit himself to add any dialogue, several key characters must be presented on screen with no explanatory conversation to smooth the way. Mary, Joseph, the wise men/astrologers from the East, Herod and his council, all appear on screen with no introduction. Even the most knowledgeable/devout person will inevitably have some moments of wondering whom they are looking at.

Herod’s slaughter of the innocents provides some scenes that are both shocking and—at least, as I have always found them—unintentionally hilarious. The mothers running from the slaughtering soldiers with babes in arms are clearly carrying dolls in many cases, and when some of them are thrown in the air this becomes far too obvious, in a classic Saturday Night Live dummy-throwing sort of way.

These first scenes of the film are bound to be at least somewhat challenging unless one is forewarned.

Act 2: Miracles and sermons, again for the first time.

Perhaps the most obvious downside of choosing the Gospel of Matthew is the way that the text is organized. Rather than spreading Jesus’ parables and sayings through the narrative like GLuke, this material is famously pulled together into five “sermons,” some of them quite long. Four of them are included, along with stories of various deeds, in the middle section of GMatthew.  This presents two problems for a filmmaker.  One is the lack of any continuing narrative thread to follow. The other is the risk of boring listeners with too much talking, or in the case of believers mentally sending them back to church with material that they have heard too many times in the same way. In order to meet these two challenges Pasolini treats the source material much more freely than he does in the other two acts of the film.

Pasolini’s answer to the narrative momentum problem is to break up and stretch out the story of John the Baptist’s imprisonment and execution, as well as his followers’ interactions with Jesus, in order to provide at least some kind of side-story narrative framework and backdrop for Jesus’ ministry. This works reasonably well, if stretching a bit.

His answer to the second issue is more interesting.  He cherry picks some of the most famous material from the Sermon of the Mount, and presents Jesus (played by a distractingly unibrowed Enrique Irazoqui) preaching it, but in no order that corresponds to this Gospel or the others. This apparent randomization amounts to a classic Marxist tactic—defamiliarization. By shuffling the deck he seems to be challenging the churched viewer to hear these texts, many of them quite radical, for the first time. And by presenting Jesus against various backdrops he makes it clear to possible objectors that he is anthologizing the material.

Pasolini also feels freer in this section to drop non-sayings material as well, relying on a few representative miracles rather than the whole list. In one case he constructs a miracle episode rather from scratch, taking Jesus’ pronouncements on healing a man with a disabled hand and redeploying them in the healing of a man who needs crutches to walk—purely for visual impact, one would think.

Once Jesus comes to Jerusalem, confronts the money-changers in the temple, and otherwise begins to stir up trouble, the familiar sequence of Jesus’ betrayal, trial, and execution is set in motion, and here Pasolini is back to following the general order of the Gospel text, with various omissions and tweaks.  The biggest omission is the fifth sermon, the thoroughly apocalyptic one that in the source text is given privately to Jesus’ disciples. Dropping the extended (two full chapters long) description of the end of days has the overall effect of drawing Jesus in more Marxist-friendly, material-world-focused terms.

By contrast, Jesus’ vituperative pronouncements of “woe” on the religious leaders of his day are included in full, even though they do little to move the story along—it is already thoroughly clear at this stage that they have it in for him. Call no one “Father,” Jesus says, providing a challenge that has always been a trifle odd-sounding for the faithful Catholic.

In Mamma Roma, he has already delivered us a filmic tableau based on da Vinci’s Last Supper, so here he instead goes out of his way to give us the anti-da-Vinci version—a peasants’ meal, disciples clustered wherever they can find a perch near Jesus, sans table.

Some viewers may notice a distinct lack of emphasis on the trial before Pilate. This is pretty much the opposite approach to that of Martin Scorsese, who in The Last Temptation of Christ decided to stunt-cast David Bowie in the Pilate role. Here Pilate doesn’t even merit a close-up. The release of Barabbas in place of Jesus is skipped entirely. I’m really not sure why.

GMatthew, true to its emphasis on apocalyptic matters, uniquely among the Gospels presents the death of Jesus on the cross as a kind of mini-apocalypse itself, complete with massive earthquakes and dead saints’ bodies emerging from their graves.  Pasolini’s film depicts the earthquake but, disappointingly for me, takes a pass on the saint-zombies. No doubt he considered that too visually distracting to put on screen.

Finally, there is the resurrection, which has an odd bid of re-ordering. The women who come to the grave on Sunday morning, rather than finding the stone rolled away already by an angel, see it fall over in front of them to reveal an empty grave. Perhaps more dramatic, but the source text version has the merit of at least explaining how the revived Jesus got out.

Pasolini also drops the story of the women meeting Jesus personally on their way to alert the disciples, cutting directly to Matthew’s final scene of Jesus’ last words to his disciples. Like the source text, Pasolini has no ascent of Jesus into heaven. In the end, Pasolini’s Jesus, even the resurrected one, is very firmly in this world.

I’ve been nowhere near exhaustive here in my list of Pasolini’s changes and omissions in his film of the Gospel of Matthew. I hope I’ve clarified the mix of artistic limitation and freedom with which Pasolini was functioning in the making of his film, and I hope that in turn this might help one appreciate much more readily this complex and challenging film.