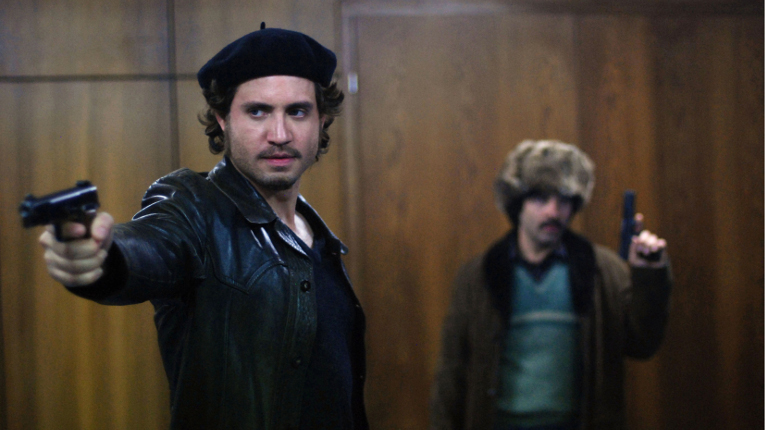 26 Jun Carlos; Something in the Air (Netflix Canada picks)

As tense and fascinating as any historical-political drama you’ve ever seen, Carlos follows the life of Venezuelan terrorist Ilich Ramírez Sánchez, a.k.a. Carlos the Jackal, from his first attacks in 1973 until his arrest in 1994. Now more than ever we are living in the midst of a cultural obsession with terrorism, but this film provides a glimpse of what a different cultural meaning the concept had pre-9/11 (all while drawing a number of a lines of connection to our moment). It occurs to me that Assayas as a director has much in common with Steven Soderbergh—bringing considerable art and incredible technique to a film that also happens to be thoroughly accessible.

At 165 minutes the version on Netflix is the shortest version available, as Carlos was also cut as a five-and-a-half hour miniseries. Both versions were showered with awards in 2010. You might think that the short version would inevitably have awkward jumps but Assayas is not above throwing name-and-description titles on the screen each time he introduces a new key historical figure, which makes it dead simple to follow the various twists and turns, and eliminates the need for unnatural expository dialogue. The result is a film that moves briskly and clearly from one chapter to the next.

In Après Mai, a.k.a. Something in the Air, Assayas also revisits the 70s—but his own experience of them. Much more languidly paced, and nowhere near as gripping as Carlos (how could it be), Assayas’ 2012 film looks good, sounds good (thanks to another well-chosen soundtrack), and has an unforced quality lent by his choice of non-professional actors for some of the youth roles (as well as a really excellent performance by Lola Créton who also had a compelling turn in Claire Denis’ Bastards). A nostalgia-infused reflection on his own days as a high-school political activist in France, it manages to touch something genuine in its portrayal of a budding film artist who finds himself simultaneously on the inside and outside of the student revolutionary movements of the times.

I do have one complaint about Netflix’s presentation of Après Mai–the only English subtitling option is SDH, which means that for several minutes of the film that feature English dialogue, there is no good way to turn off the English subtitling and descriptions of sounds. This is pretty poor by Netflix, but if you can tolerate a few minutes of slight annoyance, the film is definitely worth the watch.