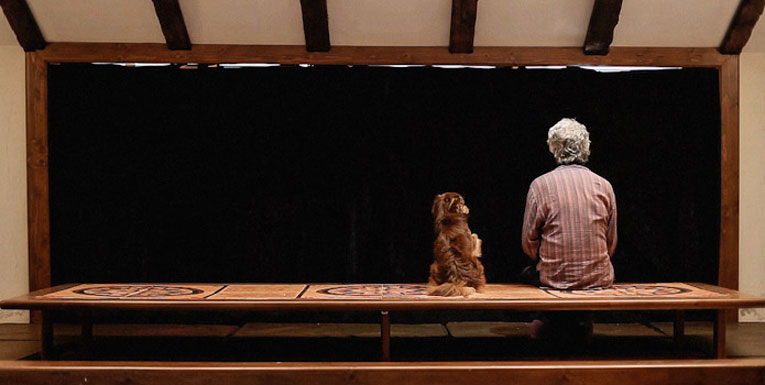 Before getting on the plane to Toronto I decided to do a little remedial viewing and finally watch Jafar Panahi’s much-touted low-budget cinematic intervention/protest This Is Not a Film. In a manner befitting a film that was shot on a shoestring and smuggled out of Iran on a USB drive, I watched it in a format that is pretty much the opposite end of the quality spectrum from the sumptuous screens at the Lightbox.  I went to this page hosting the film on a pirate website and downloaded it using this free Firefox plug-in, which yielded a 278 Mb Flash video file on my hard drive.  I then processed it into an iPad-friendly file format using HandBrake and loaded it on my aging 1st gen iPad for the trip.

Watching Panahi improvise low-budget ways around the multiple legal restrictions on his filmmaking is inspiring—a strange, low-key partial triumph of the human spirit wrapped within the melancholy of long-term house arrest for a supposed thought crime.   Nothing so shambolic should be so compelling and yet I couldn’t stop watching him watching DVDs of his own films, talking on camera to his visitor/co-filmmaker, visiting websites with his MacBook, and doing some filming of his own with his iPhone.  My compressed/low-def Apple-based set-up seemed like the right way to watch this one.

I ended the day with a much more pristine Lightbox viewing of Panahi’s more recent, more filmic, but perhaps less compelling Closed Curtain. His new piece has an interesting, subtle, and nuance intertextual relationship with the previous film, but what This Is Not a Film achieves with simple conversation and serendipitous encounters (and surprise bursts of authentic emotion), Closed Curtain attempts with a kind of murky symbolism that almost makes me think I would put up with something more heavy-handed if only it were more direct.

Clearly Panahi cannot be more clear if he wanted to—his straining at the limits of what he is allowed to say right now is heroic but leaves me with little more than a general concern for his well-being and a fervent wish that he will be able to get back to making the films that he wants to make.

On opening day afternoon I was very excited to see David Cronenberg introducing a digitally restored print of his first commercial feature: “an adolescent filmmaking exercise that maybe did some things that hadn’t been done before,” he said, after sharing a tidbit that Dan O’Bannon had seen Shivers before he wrote his Alien script.

The digital print is thick with filmic grain, which will please purists when they view this on what I presume will be a forthcoming Blu-ray release, although I do wonder sometimes, when I see the circular reel-change indicators left in the image rather than extrapolated out, whether the purity thing can be taken just a little too far. Just a quibble really.