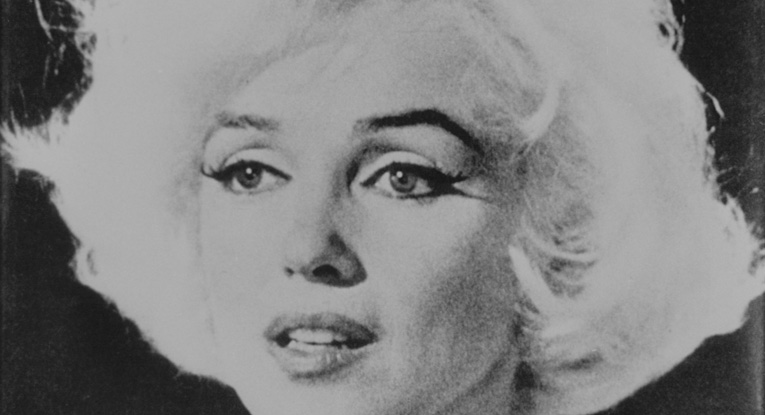 “The best thing in my half of the film—the only part of the film worth saving—is the sequence dedicated to the death of Marilyn Monroe.”

Let me cut to the chase and skip to the most useful bit of information that I can share—the 83-minute “reconstructed version” of this film, put together by Giuseppe Bertolucci, which has been screening as part of the complete Pasolini retrospective that has hit several major cities over the past couple of years—is not the version presented on the region-free DVD that is widely available from Raro.

The back text on the box of that release describes it as an “exclusive, uncut, restored version” and this is true—but the “restored” version is not the “reconstructed” version.

The “reconstructed” version is only available on a Region 2 (Europe-only) DVD which is, confusingly enough, also issued in a black, white, and red box by Raro.

It’s as if someone conceived of an ultimate video edition of La Rabbia, and then split the various elements of that package between two different discs/boxes, arbitrarily.

The more widely-available “restored” version (region-free) includes a 72-minute documentary hosted by Italian cinema critic & journalist Tatti Sanguineti, in which he describes in some detail the “reconstructed” version which would be issued seperately. Along with 5 different trailers, it also includes the much later (early 1970s) 13-minute short “The Walls of Sana’a”, a film which joined the successful effort to have Yemen’s historic city named a United Nations World Heritage site, and which makes for interesting viewing alongside Pasolini’s other developing-world studies such as “Notes Toward an African Oresteia.” None of these special features are to be found on the “reconstructed” version DVD.

The “reconstructed” version (Region 2), for extras, has instead a series of short interviews with various authorities: Cineteca di Bologna director/president Giuseppe Bertolucci, writer Vincenzo Cerami, Pasolini’s assistant director on La Rabbia Carlo di Carlo, photographer Mario Dondero, art historian Luigi Ficacci, and poet Valerio Magrelli. The reconstructed version starts from farther back in Pasolini’s planned order (rather than with the 20th sequence, about the Hungarian Revolution, with which the Pasolini-Guareschi half-and-half version rather abruptly begins). It drops the Guareschi half/film, and adds instead as an appendix some revealing moments from interviews with Pasolini.

If the two packages were put together into a single Blu-ray edition, the result would be a handy, single edition that would contain all of the elements that a motivated viewer would need to try to comprehend this supposedly failed Pasolini side project.

Unfortunately, I don’t think that ideal edition is ever going to happen, because Pasolini’s experiment with collage-based filmmaking has never been seen as central to his oeuvre. Or to put it plainly, successful. Even the wide-ranging and tolerant DVD Beaver calls it “less interesting as a film than for the story of its conception, reception, its withdrawal from circulation and disappearance, and its and rediscovery/restoration.”

I’m not completely convinced that’s fair. For one thing, that opinion seems to have been formed without viewing the reconstructed version.

Briefly put, that history is as follows:

The reconstructed section that has been added to the “head” of Pasolini’s film, does, it must be said, feel different from the subsequent material. Yes, it features the words that he wrote, over the same footage with which he had planned to match those words. But, in the total absence of originally shot footage, it is Pasolini’s fluid-yet-abrupt editing style, and not just his poetic-philosophical mode of expression, that makes his surviving original half feel like a Pasolini film. It’s clear that even the most faithful reconstructor cannot fake that.

But I still recommend it as the version to watch first—and so I think that the right choice has been made to feature it in the retrospective screening series. It is not just that it includes more of Pasolini’s original vision—it is also that the additional material helps to contextual and introduce what follows. What is more, the notes that come with the DVD booklet are excellent for filling in the historical background of the newsreel images that flicker by. They open up the film’s references to a current viewer.

Lastly… how remarkable is this film’s poetic flight out of images of delusion, death, and destruction into this tribute to Marilyn Monroe?

Shoot, like a golden dove.
The world has taught you [how].
Thus your beauty becomes [the beauty] of the world.
A beauty of the stupid ancient world and the ferocious future world which was not ashamed
of alluding to the budding breasts of a younger sister [or]
to a tiny belly so easily seen naked.
And for this reason it was beautiful: beautiful like the sweet, coloured beggars,
the gypsies and the daughters of shopkeepers who win beauty pageants in Miami or Rome.
The world taught you [how] and thus your beauty was no longer beauty.
But you continued to be a child,
as silly as ancient times, as cruel as the future …
And between you and your beauty possessed by power
there was all the stupidity and cruelty of the present.
Shoot, like a white shadow of gold.