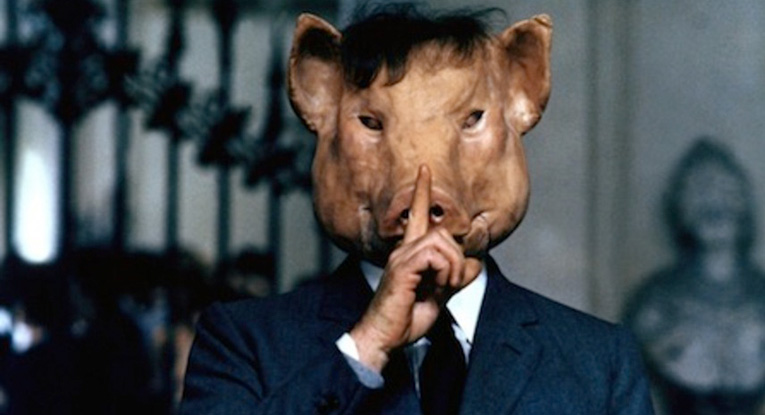 The explicit political content of the film has as its object, as its historical situation, Germany. But the film does not speak of Germany; rather, of the ambiguous relationship between old and new capitalism. Germany was chosen as the extreme instance.

The implicit political content of the film is a desperate mistrust of all historical societies. Thus, an apocalyptic anarchy.

“There really don’t seem to be any minor works in his oeuvre,” or so I blogged about Pasolini’s Hawks and Sparrows, but while 1969’s Pigsty offers no letup in intellectual intensity from his previous films, I have to say that this was the first of the seven Pasolini features that I have watched where many of the film’s elements begin to feel a bit—recycled.  It was also the last of Pasolini’s films not to be based on a major work of literature, which does make one wonder whether Pasolini felt like his own creative stores had been somewhat exhausted—along with the decade of the 1960s itself.

Yes it covers both cannibalism (shown, briefly), and sex with pigs (not shown), so it certainly does up the ante in terms of testing what an audience is ready to tolerate.  But it also brings back from Theorem:

The culturally-unplaceable “exotic” music of Oedipus Rex also makes a brief return here, fulfilling its former function of marking its society as somehow out of time, and the trial scene from The Gospel According to Matthew is back as well, again in a more bleakly satiric key.

The contemporary viewer needs to be prepared for some pretty oblique dialogue and referencing of the sociopolitical scene as Pasolini saw it at the time.  His use of satiric references to Nazism still comes across pretty clearly.  But the film is not about Nazism in the first instance, as Pasolini said.

I have come to realize in the course of watching these first seven films of Pasolini’s that 1) each of these films has at least one Christ figure and 2) you can always safely assume that the Christ figures are the characters that Pasolini identifies with. Pigsty has two Christ figures and Pasolini freely confessed that he identified with both. Drawn your own conclusions.

Not that it’s terribly crucial to appreciating this film, but I have to say it: Anne Wiazemsky looks unbelievably stylish in every one of her scenes—and in fact almost weirdly contemporary to my eye in 2013. If I had the time to rip this DVD and pick a bunch of screen caps I could assemble a pretty impressive fashion slide show.  The costume design is by Danilo Donati, who in addition to several of Pasolini’s films worked on others by Fellini and Zeffirelli. His last major project was Life is Beautiful.