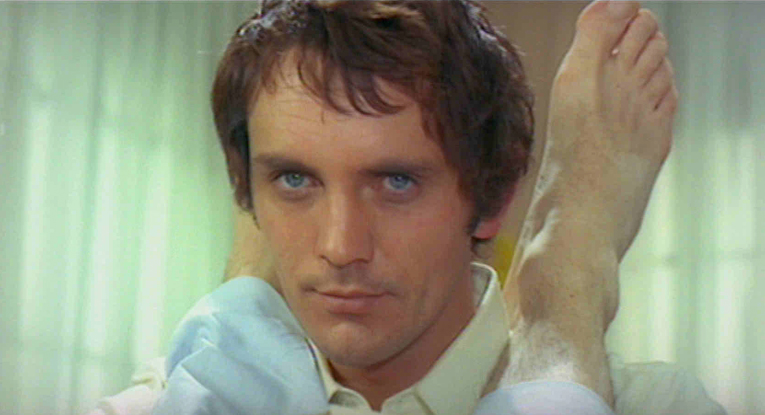 12 Feb DVD diary: Theorem, or, the Discreet Collapse of the Bourgeoisie (Pasolini 6: Teorema)

It had been about seven years since the first and last time that I saw Pasolini’s Teorema. It seemed a bolt from the blue; my only previous exposure to Pasolini had been The Gospel According to Matthew, and I wasn’t quite sure what to expect. When I think about how brilliant it seemed, and how some of the images from it have stayed with me ever since, it’s kind of remarkable that it’s taken me this long to get around to my current project of watching all of his films in order.

Screening it now, in sequence after his first five fiction features, I do a see some richness of reference to his previous work (especially Gospel and Oedipus Rex), and having that additional context does illuminate his approach to some extent, but even after all that the shock of its brilliance remains.  In his critical commentary on the BFI DVD, Robert Gordon calls this film a “high water mark of auteurist cinema” and that is precisely what it is to me.

Really great works of art teach you how to appreciate them, don’t they, and there is something of that quality to Teorema. This film essentially breaks the three-act rule to deliver its coldly passionate theorem; if A, then B. This two-part, bilaterally symmetrical structure prevents us from expecting the kind of resolution that a conventionally plot-driven film would inevitably deliver.

Something I really enjoy about both Antonioni and Pasolini is the way that both directors use the presence of particular books to tell us things about the characters (unlike Godard, perhaps, who likes even his choices for book cameos to be opaque/cryptic).  In Teorema we don’t need to know much about Rimbaud, or the art of Francis Bacon, but a little bit of acquaintance does help.  The only literary-referencing scene that is really difficult to understand without knowledge of the source material is a scene where a physical interaction recalls a similar action from Tolstoy’s Death of Ivan Ilyich, so here I confess, not having read the Tolstoy, I was dependent on the explanation on the commentary track. By and large, though, the film’s points of reference add context but don’t demand to be completely understood on first viewing. Pasolini deploys minimal dialog here and for the most part lets the images communicate. It is his most purely visual cinema yet.

The 2007 DVD of this film (which I screened for this viewing) was already a huge upgrade from previous DVDs, but I am very much looking forward to the forthcoming BFI Blu-ray edition, which at time of writing is slated for release on May 13, 2013. If Masters of Cinema’s Oedipus Rex is anything to go by I know that this film can look even better. I will be double-dipping I expect.