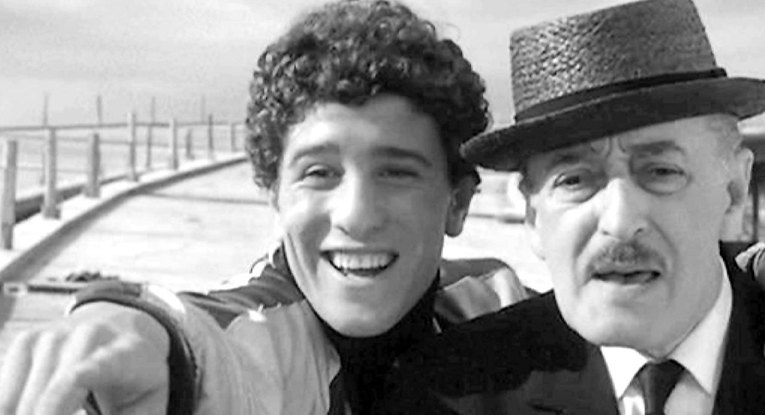 I agree it is not very funny. It makes you think more than laugh. But when it was put on in Montreal and New York the audiences laughed a lot, to my great astonishment, unlike in Italy, where they were a bit disappointed… Pier Paolo Pasolini interviewed in 1969

One thing I seem to be discovering on this film-by-film chronological tour through Pasolini’s films is that there really don’t seem to be any minor works in his oeuvre.  Certainly his debut Accatone has some of the limitations that one associates with a first film, but even a film like 1966’s The Hawks and the Sparrows (Uccellacci e uccellini), that opens with a series of gestures that seem wacky and flippant by turns, turns out to be Pasolini’s most accomplished and confident effort yet, and a serious (yet comic) examination of ideology as well—thought not too serious, as Pasquale Iannone says.

Masters of Cinema’s DVD (locked to Region 2) was released last year, and while I’m a tad disappointed that this film was considered too minor to receive the full Blu-ray treatment (or for that matter, any extras other than a trailer), it must be said that this is a really excellent transfer—pretty much the best anamorphic standard-def representation you could hope for. Iannone’s essay in the included booklet provides some useful context to a first-time viewer like myself. (MoC have more literally rendered the Italian title in English by dropping the definite articles, titling the film Hawks and Sparrows.)

The main title sequence, in a straight-up wacky move, is sung by singer-songwriter Domenico Modugno, and Pasolini follows that up with a series of call-backs  to Gospel According to Matthew, starting with recasting the previous film’s annunciating angel, Rossana Di Rocco, as a teen angel of a different sort (wearing wings, unlike in Gospel, because, as she explains, she’s in a play at school).

Soon Pasolini will fling us into a 13th-century story-within-the-story, in which he will shoot and frame the pronouncements of St. Francis of Assisi in exactly the same way that he did Jesus in Gospel. Our two protagonists, Totò and Ninetto Davoli as father and son (surnamed “Innocenti”) pop  up as medieval monks complete with suitable names. When the local villagers adopt Totò’s “Frate Cicillo” as their new favourite saint, a full-on festival breaks out complete with an amateur comic play, at which point we have a play within a play within the play, which disintegrates at the moment when Pasolini unleashes a mock cleansing of the temple, in his final reference to his Jesus movie.  But somehow Pasolini is so masterful that even his excesses don’t seem excessive.

For Pasolini the end of ideology is not just a moment for postmodern celebration, but entails a tragic side, most evident when he makes use of footage from the actual funeral of Palmiro Togliatti, leader of the Italian Communist Party from 1927 until his death in 1964. But this is juxtaposed with another scene featuring travelling clowns/entertainers—Pasolini’s way of “quoting” Fellini and incorporating the comic carnivalesque (a move which, for example, Terrence Malick imitates in Days of Heaven ten years later).

Pasolini is also not above using Benny-Hill-style sped-up motion for a laugh, and watch for a couple of comic moments that will be quoted in turn, later, in Monty Python and the Holy Grail and The Life of Brian. But my favourite is a sequence that is rather hard to describe, but which entails Totò and his son/sidekick communicating with sparrows by using their… dance language?

In a scene that has, shall we say, aged poorly, Totò and Ninetto Davoli as father and son (surnamed “Innocenti”) take turns going off in a hayfield with the fantastical comely lass “Luna,” whom the father afterwards indirectly labels a “whore.” I think this was supposed to be the embrace-of-life-after-the-death-of-Marxism moment but unfortunately it now plays as something more like Luce Irigaray’s “hommo-sexuality.” So it is not just the mourning of the passing of communism that makes this film feel like it belongs to another age. I think the film works best for me when I think of that final sequence as a coda from another time rather than a summation or conclusion of what has come before.