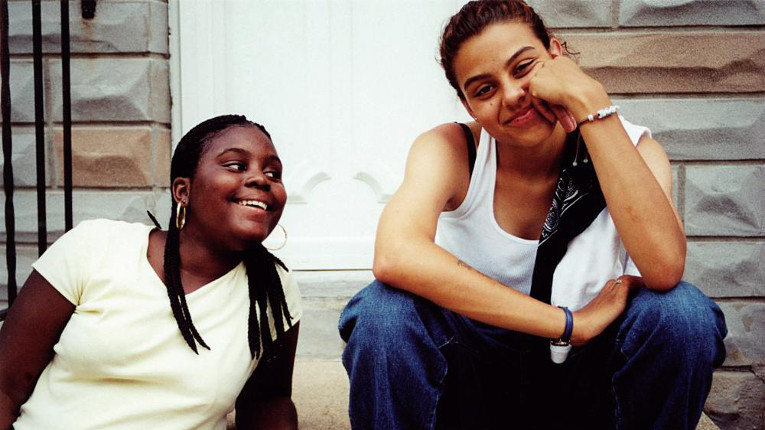 It was a pretty savvy move by Netflix, if it was a conscious decision, to add these two films around the same time as Richard Linklater’s Boyhood. Then again, documentarian Liz Garbus’ most recent project—a revealing Sundance-opening Nina Simone doc—hit Netflix a few days ago, and Céline Sciamma’s Bande de filles had its very low-profile post-festival US theatre run from January to May, so both films have their own reasons to be freshly available online.

Neither one was created, of course, in response to Linklater’s excellent film (and note that “bande des filles” translates more literally as “girl gang”), but both have much to say about how adolescence looks from the othered side of race, class, and indeed gender privilege lines.

Garbus’ 2003 documentary (shot on 16mm, and presented in an unimpressive SD transfer) follows two Baltimore girls for three years, one a convicted (at the age of 12) killer, as they attempt to re-integrate with society after their release from a juvenile detention facility. As it covers the years 1999-2002, it plays, in a way, as a real-life prologue to The Wire‘s depiction of Baltimore’s corners. Upon release, the doc received scattered criticism for trying too hard to find an upbeat ending. Perhaps that’s fair, but I found these parallel stories so engrossing that I began to wonder where they are now—and it turns out that both Shanae Watkins and Megan Jensen have occasionally re-emerged in the public eye.

Céline Sciamma’s fictional portrayal of life in the banlieue seems tame at times by comparison (when these characters talk about having “iced” or “wasted” other girls, they mean beating them in a more-or-less fair fistfight), but it is a satisfying coming-of-age story that moves from bleakness to adolescent joy and points between. The French social safety net is a mostly invisible failure here, and at times you wonder how the film will balance this protagonist’s lack of opportunities with the need to represent her agency. But in fact it finds a thoughtful, realistic and moving balance.