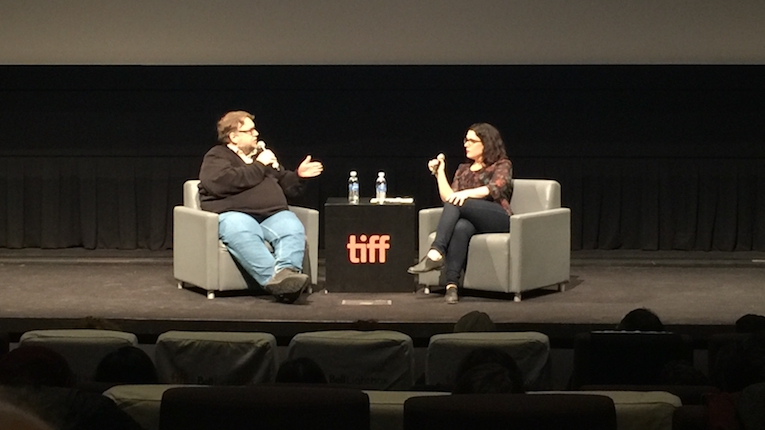 Last week’s “Luis Buñuel in Mexico” three-night master class with Guillermo del Toro at the TIFF Bell Lightbox in Toronto was a fantastic event. Before I get to some screening takeaways, I want to say up front that I really like how TIFF is delivering on curation & access with an event like this. $62.25 members/$75 general public for six films over three evenings—with GdT himself dishing insight—was value for money (and indeed sold out very quickly).  TIFF’s director of adult learning Theresa Scandiffio did a great job of keeping things on time and on point, and no doubt did a lot of work behind the scenes to make this event happen.

When del Toro first started dropping hints about this event, I was hoping it would be part of a broader retrospective of Buñuel’s work, similar to what London’s ICA did a year ago. As it turned out, three consecutive nights as one-off event worked out really well for me, as I was able to go to Toronto for a week and take in the whole thing.

Too often—and this is one of the first points that del Toro touched on—Buñuel’s Mexican output has been dismissed as inferior to his later, better-known European films like That Obscure Object of Desire, The Discreet Charm of the Bourgeoisie, and Belle de Jour. Del Toro’s six-pack of mostly-underappreciated Buñuel works included four films recognized to varying degrees as artistic masterpieces (Él, Nazarín, Viridiana, Los Olvidados), as well as two (deceptively) straightforward melodramas (Susana, El Bruto), and he came prepared to defend all of them. In the 1950s, he pointed out, Mexico was the Hollywood of the Spanish-speaking world, and films made there were dominating screens in Spain and elsewhere. If drama is a torture of despair, melodrama is a torture of hope, del Toro observed, and Susana and El Bruto, while respecting formula (something del Toro defends as a form of cinematic discipline), stir in plenty of subtle Buñuelian elements, with frankly sexual moments, playfully—and often darkly—Freudian imagery, and of course the inevitable dash of foot fetishism. I came away convinced that these two films are, in the words of Philip French, “significant bricks in a major oeuvre.”

Buñuel and Hitchcock are del Toro’s two favourite filmmakers, he told us, and Él, Buñuel’s most Hitchcockian film, was one of the two biggest discoveries for me personally, of the six films. Much like Rossellini’s La Paura, it’s a case of a master filmmaker deeply absorbing the techniques of Hitchcock’s British and early American films, and then taking that narrative to a darker place than Hitchcock was ever prepared to go. But, fascinatingly, it is also immediately clear that it was enormously influential in turn on Vertigo—leaving me with the feeling much like suddenly having heard for the first time the opposite side of a phone conversation.

Nazarín was the other film that fascinated me the most. The most Pasolini-esque of Buñuel’s films (yet preceding all of Pasolini’s films) with its ironic Christ-figure at the centre of the narrative, it was the most allegorical and perhaps the most difficult of the films on offer. Its narrative direction is not always clear but its individual episodes are fascinating; I very much look forward to a re-watch, perhaps paired with his later, similar film Simon of the Desert.

The other two films were more familiar to me. I remembered the gripping social-realist aspects of the award-winning Los Olvidados—I’d forgotten about the brilliant nightmare sequence, which I doubt I will forget again. Viridiana is by far the most familiar and most cherished of these films for me, but of course it’s been available as a decent Criterion-released DVD for ten years now.

And that brings me to one of the major issues that del Toro raised on the second night of the master classes—the poor quality of some of the prints. I was glad for the opportunity to see what are likely the best-available versions of these films, but the quality of the prints and transfers was, well, a mixed bag. Del Toro says that he would be willing to put some effort behind getting them properly restored and released as high-quality Blu-rays—if I can help out some way, Señor del Toro, and/or TIFF friends, sign me up! I would love to see that happen for all six, but especially for Él and Nazarín.  In the meantime, here are your best options for home viewing. None of them are available in an English-friendly Blu-ray release.