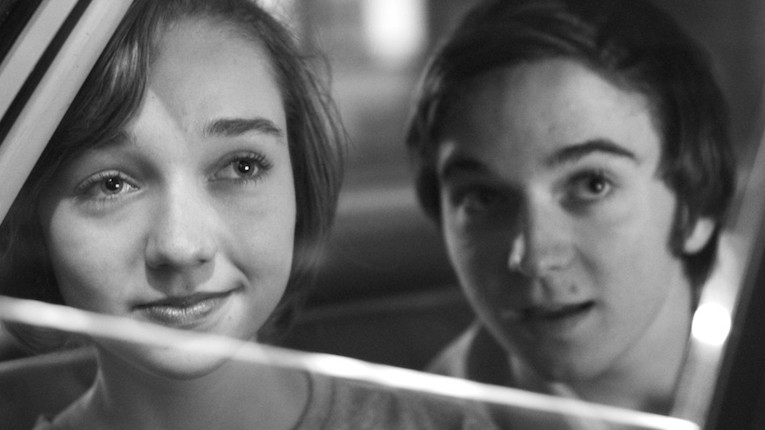 Bruce McDonald’s summer-of-’76 Cape Breton road movie Weirdos, “a tender but never sappy memory piece” that premiered at TIFF (and locally at AFF) last September, has arrived at Cineplex Park Lane, hot on the heels of Daniel MacIvor picking up the Best Original Screenplay trophy at the Canadian Screen Awards last Sunday. Tara Thorne in last week’s issue of The Coast says “Weirdos was the first film made under the newly structured provincial tax credit system, shot in beautiful black and white by Becky Parsons all around Nova Scotia in the autumn of 2014″—a bit of a strange way to frame the film’s production story, to be fair. In fact, as producer Mike MacMillan related at AFF in Halifax, the film was originally set to be filmed in the summer, when our provincial premier, in foolishly uninformed fashion, based on a discredited economic theory, and contradicting his own explicit promise, gutted the province’s film tax credit system. When the funding basis for the film disappeared overnight, the shooting schedule had to be delayed until fall, which in turn prompted the shift to black and white, in order to conceal any visible signs of fall foliage. But this indeed is a lovely look for the film, and the CSA-nominated production design by Matt Likely is downright heroic in my book—absolutely nails the details of 1970s Nova Scotia.

The Dal Art Gallery First Features series continues this Wednesday with The Seventh Continent, the 1989 debut of Michael Haneke to which “all the icy gloom of Code Unknown, The Piano Teacher, and Caché can be traced back.”

Friday, Carbon Arc returns from March Break hiatus with the eco-doc Call of the Forest: the Forgotten Wisdom of Trees.

If you missed Jackie during its brief Halifax run, Fundy Cinema in Wolfville gives you a second chance with a couple of screenings this Sunday.