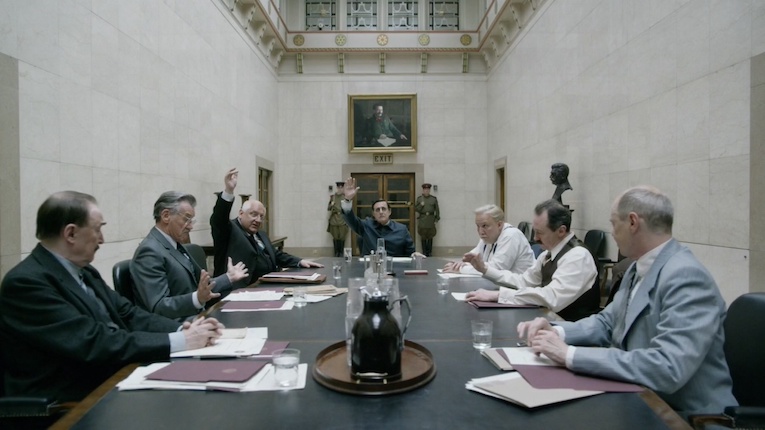 The Death of Stalin seems like a timely comedy for the dark Trumpian timeline we currently find ourselves on, but the Village Voice’s Bilge Ebiri says it “would be a brilliant, harrowing film even without all that contemporary resonance.” I’m just delighted that it’s arrived in Halifax.

“In a fairer world, Portrait of Jason would have done what [Shirley Clarke’s] earlier works didn’t—it would have launched her, turned her into one of the most sought-out, most admired, and busiest directors of the time,” writes Richard Brody in The New Yorker.  “In director Shirley Clarke’s daring and ground-breaking documentary,” says the Dal Art Gallery’s note for this Tuesday’s screening, “would-be cabaret performer, hustler, and gender preference pioneer Jason delivers an electrifying monologue about what it is like to be black and gay in mid-Sixties USA.” This is the latest in the Gallery’s Women Filmmakers 1931-1969 series of free screenings, rescheduled from two weeks ago for nor’easter reasons.

Carbon Arc this Friday is showing the sexual-assault-themed The Light of the Moon, and they are doing it in partnership with the Avalon Sexual Assault Centre, which seems to me like a really creative and responsible way to handle such a screening. “The film’s concerns are profoundly therapeutic, but it nimbly avoids every therapy-drama cliché,” says Sheri Linden of the LA Times.

Speaking of filmmakers and responsibility around themes of sexuality and violence—Steven Soderbergh’s new shot-on-iPhone suspenser Unsane is on a couple of Cineplex screens in Halifax, but I can’t bring myself to add it to my “recommended” list. From a strictly film-technique point of view, there’s much that’s praiseworthy, but too much of the content is awkwardly written or just out of place in 2018.  It has, however, inspired a very thoughtful take by the New York Times’ Manohla Dargis.