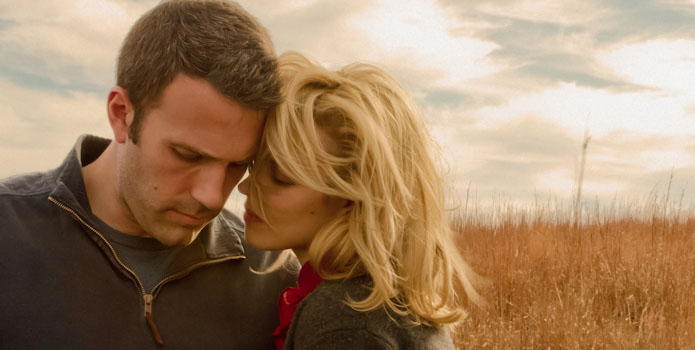 Posted at 12:18h in Festival Journal by james 3 Comments
Share

On Tuesday I was at the Princess of Wales Theatre for the repeat screening of Terrence Malick’s To The Wonder. I had purposefully tried to keep my expectations low, suspecting that Malick could not have come up anything as substantial as The Tree of Life in what for him was an extremely short period of time between films. I was delighted, then, to experience what seems to me his most focused, narratively clear film ever; still uniquely Malick yet more intimate, purely distilled, and—without precedent in my experience of his films—ultimately heartbreaking.

But the bigger surprise came afterward—the reaction.  Browsing the reviews online, I scrolled through a bizarre litany of complaints.  The film is “almost sickeningly self-indulgent and pretentious,” “ultimately vacant,” with characters robbed of “specificity,” “empty in meaning” with “no wonder”—a “disjointed, empty tale” that “doesn’t add up.”

I’m assuming that the folks who write these things spend a significant portion of their lives watching films and writing about them.  So I find the “vacant” criticism deeply weird.  That’s not to say that all of the people who didn’t like it also didn’t get it. But there is certainly a trend in that direction.

What I want to say is this—To The Wonder is a very straightforward story told mostly visually with minimal dialogue.  It pushes further in that direction, perhaps, than any previous Malick film.  But in almost every scene it is absolutely clear what’s going on, not just narratively but emotionally.  You would think from reading these reviews that the film is nothing but a series of arbitrary images chosen for their visual beauty rather than their narrative logic.  If all you had were these reviews to go on, you could be excused for being so wrong.

I guess it’s only human to try to cut things down to size that aren’t understood, but I find it unexpectedly painful to watch it happening to a film that clearly doesn’t deserve such treatment.

I gather that The Tree of Life itself had a bit of a bumpy landing at Cannes before its reputation was rescued as more people saw it, so hopefully To The Wonder will survive the early shredding and find an appreciative audience.  As a Malick fan I care less whether it can nab middle-brow-approval certification a.k.a. the Oscars—I just want it to find good distribution so that lots of people, including everyone who wants to, can see this brilliant, heartfelt film.