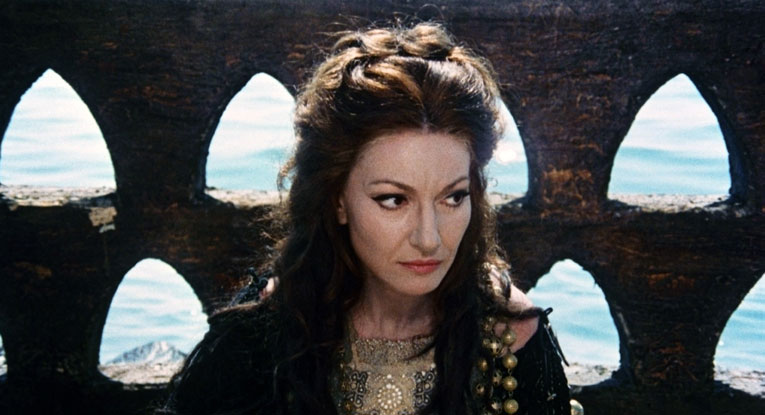 Posted at 13:44h in Screening Report by james 0 Comments
Share

Call me crazy but I think I’m starting to get what Pasolini is on about with this film. I’m not sure how many in the audience at last night’s nearly-full screening, the third in TIFF’s complete Pasolini retrospective, would agree with me… especially the woman two seats away from me who spent considerable time texting on her iPhone.

However I think Pasolini’s adaptation/palimpsest of the Medea myth, after thoroughly baffling me on first viewing, is starting to make some sense to me thanks to a fantastic book I picked up at the Lightbox gift shop—Pier Paolo Pasolini: My Cinema

. It’s a coffee-table-appropriate book stuffed with incredible archival photos, and with text derived from Pasolini himself—interviews, articles, letters. For each of his films there are multiple such quoted passages. It’s as close as one could come to having Pasolini himself write the exhibition catalogue for this retrospective.

In one of the Medea passages—an interview from 1970—Pasolini says “I abandoned the Greek myth and started reading essays on the history of religions, ethnology, anthropology, with the result that little by little, my imagination began to move in that direction, basically leaving Euripides behind, though I did keep a few of his ideas…”

And later… “Medea… is based on the history of religions, on Frazer, Lévi-Strauss, Levi-Brüle [sic]. Reading their books gave me the idea to conceive the world of Medea as a symbolic fragment, an oneiric-visionary image of the Third World.”

OK. I can’t be sure of all the specific ideas from these scholars that Pasolini was wrestling with in the construction of this script, but I was able to draw one clear conclusion that really illuminated the first 45 minutes of the film for me—that section of the film that is not really based at all on the Euripides play. What Pasolini is doing, it seems to me, is to try to liberate the narrative with its climactic filicide from its typical rational frame—its strange place nestled in the foundation of the canon of Western literature. He wants us to see Medea’s murder of her children in the context of a more primitive world where human sacrifice was an accepted social practice with its own protocols. And he wants to dramatize the conflict between the primitive/child/myth world and the civilized/adult/reason world or Weltanschauung. If you like, he wants to blow up the bridge from the present/Western world to Greek myth and make us approach the strangeness of Medea’s murderous act from an entirely different direction.

This is why the film begins, it seems to me, with the gruesome sacrifice of a young boy. What Pasolini has inserted is a kind of call for which Euripides’ climax later supplies the response. Seen from this perspective, everything up to the theft of the golden fleece in the film no longer seems like an arbitrary, confusing preface. Pasolini’s cooked-from-scratch first act is nothing less than an attempt to set an entirely different frame of reference than that which is usually brought to contemporary readings of Greek tragedy.

Some of the scenes in the film have minimal or no dialogue (Pasolini refusing to provide standard psychological/motivational explanations for the narrative events), while others feature dense philosophical discussions and pronouncements that are not easy to absorb on the fly. So the film is really not possible to fully absorb in one viewing it seems to me. Pasolini said that Medea is “perhaps the most intellectualized part” of his oeuvre. For the first time—on third viewing—I am glad that I have stuck with this one.