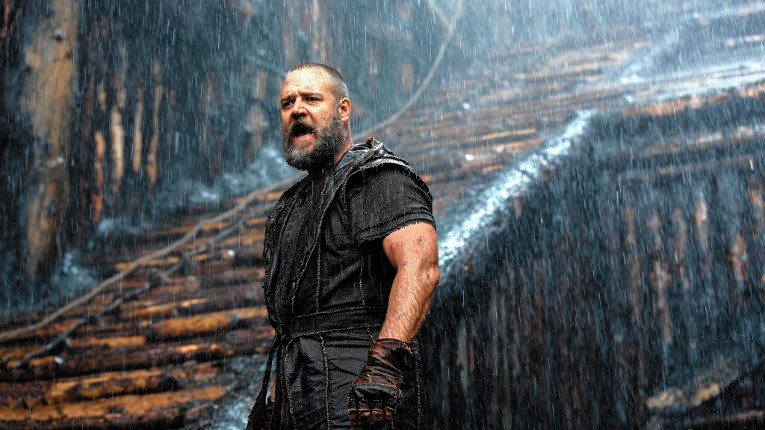 Darren Aronofsky’s Noah was such a divider of film-opinion and religious opinion alike that I was rather surprised to notice recently that it had made back three times its production budget in global box office. But the first surprise was seeing it when it was released to theatres—the bombastic trailer (as per usual, excerpting all the trailer-ready lines… “IT BEGINS,” puh-lease) had primed me for a cynical contempt-watch, but instead I was watching something so deeply thought out at every level that I was shocked into pure enjoyment.

I often say that I love spectacle/action movies but they don’t love me back—I’m always disappointed by scripts that are about one-tenth as meticulously engineered as the visual effects. But here we have a screenplay co-written by Harvard-educated neurobiologist Ari Handel, who had been working on the script with Aronofsky for more than a decade, and who clearly has thought deeply about canonical and extra-canonical Hebrew scriptural tradition, existential and ethical philosophy, creation and evolution (bombastic polemic on both sides of that culture war is common—creative mashups of both narratives, not so much), and our present environmental crisis. Recasting the narrative as a LOTR-era fantasy spectacle seems an audacious and insightful move to me, drawing on a close contemporary equivalent to Axial-Age-era myth-making.

The much-commented-upon CGI rock-monsters, the Watchers, have a back-story mined from the obscure ancient texts of 1 & 2 Enoch (not Gnostic writings, despite complaints to that effect from the evangelical right), and the crisis of ethics that transpires on board the ark manages to incorporate the core conflict of the later biblical story of Abraham & Isaac in a way that pushes to a hard point the dire implications of the story of a deity prepared to wipe out nearly all of humanity for its sins. There’s been an onslaught of apocalyptic fictions in the last few decades, from zombie horror to science-fiction Armageddons, and pop-science books describing what our world would be like post-environmental-disaster or post-humanity. In all of them there is a sense, latent or manifest, that if humanity were extinguished, it wouldn’t be completely unjustified. It’s in that context that Noah skillfully defossilizes one of the central quandaries of monotheism, putting it to the viewer as a question of surprising immediacy.