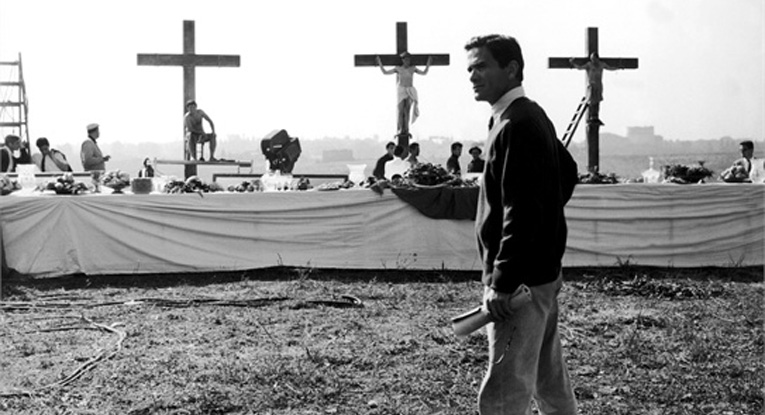 The TIFF Pasolini retrospective is over, now; the final screening was last Saturday (Salò, April 12) and though I’m pained to have missed the last 11 screenings, I can count myself lucky for having been in Toronto for the first five. My favourite of the lot was the one that I have perhaps seen the most times—The Gospel According to Matthew (Il vangelo secondo Matteo, 1964), but I almost missed at least the first few minutes, narrowly avoiding entering the wrong screening room at the Lightbox.

The last-minute change of theatres was due to an extra screening that had been added to meet overwhelming demand for Paul Verhoeven’s Showgirls—a later screening, introduced by Adam Nayman, author of It Doesn’t Suck: Showgirls, had sold out well in advance. If I had accidentally ended up in the wrong theatre on this night, those first few minutes would have been confusing…

Verhoeven and Pasolini might seem an improbable director-swap, but in fact the two have at least one relevant quality in common—a long-held fascination with Jesus.  Of the two, it is in fact Verhoeven who has the greater command of Jesus historiography; although his PhD was in math and physics, he developed quite an expertise in the historical reconstruction of Jesus’ life. He was a voting fellow of the Jesus Seminar (the only one without a related graduate degree), and—according to a mutual online acquaintance who was also in the Seminar—reads Koine Greek (the original written language of the Gospels) “like a newspaper.” As you might know if you have read, for example, the excellent Grantland feature on his directing career from a couple of months ago, Verhoeven published in 2008 a scholarly biography of Jesus, and has long harboured plans to direct a historical Jesus movie—plans that so far have failed to come to fruition.

You might well ask whether such a film—the life story of Jesus narrowed down to the parts that are historically possible and probable—would be possible even to make. For his part, Pasolini felt sure that it wasn’t—at least, not for him. “If I had reconstructed the history of Christ as he really was I would not have produced a religious film because I am not a believer… I would have produced a positivist or Marxist reconstruction at the most, and thus at best a life which could have been the life of any one of the five or six thousand holy men who were preaching at that time in Palestine. But I did not want to do this, because I am not interested in deconsecrating: this is a fashion I hate, it is petit-bourgeois.”

Pasolini was much more interested in the Christ of myth than the Jesus of history (a cliched distinction that buries some complications, I realize), and nothing gives greater proof of that than the Christ narratives and Christ figures that dominate many of his films: Franco Citti as the titular pimp in Accattone, Ettore Garofolo as the ill-fated son in Mamma Roma, Terence Stamp as an almost-otherworldly seducer in Teorema. It is almost too obvious to mention but there is also Pasolini’s infamously court-case-inducing, supposedly blasphemous short film La Ricotta, featuring Orson Welles in a brilliant comic turn as a bourgeois Jesus-film-making director. La Ricotta features not just one but two Christ-figures—the actor portraying in the film-within-the-film one of the thieves crucified with Christ, and the actor portraying Jesus. The former turns out to be the true proletarian Christ of the narrative, while the latter is implicitly false.

I sometime encounter statements that seem to marvel at the thought that this highly secular, gay, Marxist intellectual directed a movie about Jesus that leaves in most of the significant miracles and contains no dialog that doesn’t come directly from the Gospel, but this rather overlooks the fact that the Jesus of Il vangelo secondo Matteo is, by my count, the fifth in a series of at least six cinematic Christs that Pasolini deployed in his films.

What is more, the specifically Matthean Christ is there, indirectly, in his very first film, Accattone, via a looped excerpt from the finale of Bach’s St. Matthew Passion that repeats on the soundtrack. Pasolini would bring back this piece, along with the tune of a famous aria from the same oratorio, on the soundtrack of his film of Matthew’s Gospel. I recently attended an excellent performance of this Bach oratorio here in Halifax, and read along, musical number by music number, with Victor Lederer’s excellent Bach’s St. Matthew Passion: A Closer Look. I found myself once again thinking about, you guessed it, Pasolini (who, you might also guess, was such a student of Bach’s music that he wrote a study of the sonatas).

This is worth a quick explanation for those not familiar with the structure of this and other oratorios. Bach’s three-hour-long musical extravaganza mixes narrations that are pulled directly from the Biblical text—sung by various soloists who are effectively taking the roles of individual characters from the Gospel story—with other songs and hymns that effectively comment on the action not from the point of view either of the characters or any authority figures of the church, but from the point of view of a present-day pious individual. How great the suffering of Christ, the choruses tell us, attempting to articulate and incorporate or inspire our thoughts for us. What a debt we owe. How shall we then live?

In Pasolini’s Il vangelo, we have, as with Bach’s oratorio, verbatim words of the Gospel in the mouths of the characters—but the dialogue has this and nothing else. Is Pasolini inspired not just by the emotions of the oratorio, but indeed by its structure? If Pasolini is attempting to create in this way, we have the scripture, but what provides the commentary on it? In Pasolini, the commentary is purely visual. It is in the landscapes, and in the faces of the cast.

What Pasolini realized early on was that he was not going to be able to accomplish anything by attempting to reconstruct with historical verisimilitude the people and the landscapes of Jesus’ time. In the documentary Seeking Locations in Palestine (Sopralluoghi in Palestina) we see Pasolini touring the irreversibly transformed Biblical lands, realizing from the first day that he cannot shoot there. The Israeli Jews are modern and prosperous, the Arabs are an impoverished underclass, he observes—neither will do to portray Jewish peasants of two millennia past, and the landscapes of places like Nazareth are thoroughly modernized.

Instead, Pasolini chose to work by analogy. For locations, he chose Italian locales that would feel archaic and visually communicate the essence of the Biblical locations. For Bethlehem, for example he used the caverns of a village between Lucania and Puglia. He worked similarly with the casting. His cast members, including all the Jewish characters, are often unmistakeably Italian, but he cast them based on how effectively they could portray members of their characters’ economic classes. Those choices were themselves based on many layers of Christian tradition—Pasolini said in an interview: “About half of them were of humble origin; others, like Matthew, did have a more intellectual background, so I chose an intellectual for him.” Ferruccio Nuzzo was the intellectual in question; Pasolini also cast a young Giorgio Agamben in the role of Jesus’ disciple Philip.

None of this seems very intuitive in the post-Gladiator age of CGI reconstruction of ancient locales, and I have to say that I really didn’t understand Pasolini’s approach at all when I first saw his film. It was the first Pasolini film I’d seen, and I had no sweet clue why ancient Israel was being represented by the people and locations of rural Italy—it seem rather awkward to me, quite frankly. But coming back to this film, in 2014, in the form of a fresh 35mm print beautifully projected at the TIFF Lightbox, I felt I was not just viewing a pristine image, but seeing much more clearly the aesthetic strategies driving the film.