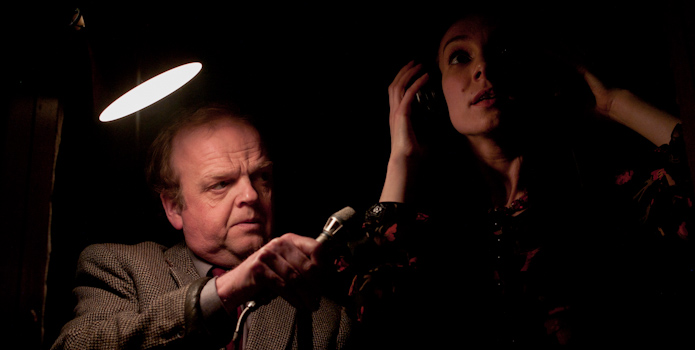 Berberian Sound Studio is a strange little paradox of a film. Aesthetically outstanding in its referencing of giallo cinema of the seventies, and its fetishistic deployment—and editing—of analogue sound, the second feature from UK director Peter Strickland features a note-perfect performance by Toby Jones as a put-upon English sound engineer who has been recruited to record the audio for a fictional giallo movie called The Equestrian Vortex. We see none of this film other than a brilliantly-imagined main title animation—rather we witness fruits and vegetables being smashed and ripped to create the sounds of horrifying acts of violence, actresses screaming with varying degrees of convincingness, and Jones watching the screen in disbelief. The film is grounded in how sound engineers actually work yet creates a closed-off little universe that is increasingly surreal.

But it does feel in the end as if Berberian Sound Studio has not quite arrived at its best possible destination. It is kind of a distant but clearly recognizable cousin of Mulholland Drive, with a relationship to giallo much like the Lynch film’s relationship to Hollywood, but in a more constrained way. The repeated scene of the red, blinking “Silenzio” light in the studio, for example, seems a call-back to Mulholland Drive’s Club Silencio, suggesting that the studio, like the club, is a portal to an alternate reality. When the plot inevitably begins to fold back and double on itself, Lynch style, it’s hard to feel that this film has managed those moves nearly as well as its predecessor.

That said, I still want the soundtrack, and yes, I want to know exactly what soundtracks are on Strickland’s own playlist.