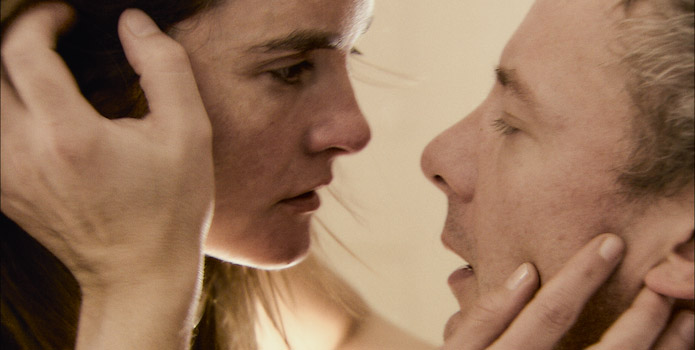 Like its obvious British kitchen-sink-realism forebears, the film relies on strong performances from its professional and amateur cast to create its feeling of authenticity. But in an a twist perhaps unique to this film, in order to present the children aging naturally over five years, Winterbottom went to the trouble of re-assembling his cast annually for two weeks each year. As well, he has filmed domestic scenes with the children in their own home.

This has the expected benefit of unforced naturalism in the performances and realistic passing of time, although the filmmakers likely could not have predicted the degree to which the kids would grow to look perhaps a little too different from their actor-parents.

The other progression in the film is a noticeable improvement in the quality of the digitally-shot images. At the Q&A session after the North American premiere at TIFF yesterday, Winterbottom said that the subtle progression was not simply an accidental matter of better cameras becoming available, but rather was in the filming plan from the beginning. That said, in the earliest conception the intention had been to switch to 35mm film for the final-year sequences, but instead they were able to get a 35mm-like look with an Arriflex digital camera, and thus the entire film was shot digitally on a variety of cameras. Winterbottom says that substantial post-production work was done to make the differently-shot scenes blend together seamlessly, so that the transitions in image quality would not be distractingly obvious.

You might expect from the title that not much happens in this film, and you would be right. There are some painful separations, some moments of conflict and fear with the children, a setback in the father’s release timeline, a spot of marital infidelity. But what the film lacks in narrative interest it more than supplies in depth of feeling. This is a film that does exactly what it says on the tin, with perfectly subtle execution.