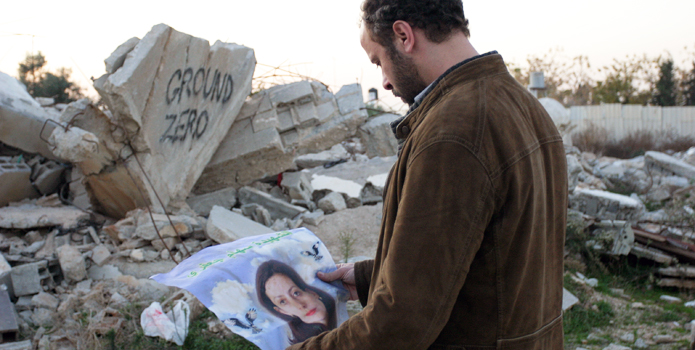 A successful Palestinian surgeon (Ali Suliman, in a compellingly restrained performance), respected and honoured by the Jewish Israeli medical establishment, and working in a Tel Aviv hospital, sees his life’s foundation drop out from under him when his wife perpetrates a suicide bombing that kills 17 people, 11 children among them.  Ziad Doueiri’s absolutely remarkable film The Attack surprised me with its nuanced handling of this loaded storyline, adapted from the novel by the pseudonymous author Yasmina Khadra.

Doueiri first came to attention working first assistant camera on several Quentin Tarantino films including Reservoir Dogs and Pulp Fiction. He made a minor splash of his own with his engaging, semi-autobiographical West Beirut, about growing up in Lebanon in the 1970s. He has made only one film since, and West Beirut remains today as his best-known work.  That is about to change.

The filmic style here feels contemporary without overtly calling attention to itself, in a way reminiscent of the best work of Steven Soderbergh and Alejandro González Iñárritu. Jump-cut edits are very few but skillfully placed; the palette tends to blue without too-dramatic tint.  From the sharply crafted layout of the main titles to the alternately moody and propulsive score by Eric Neveux, the film feels intricately crafted. It further benefits from a script with equally thorough attention to detail.

The central question to which the the film and the protagonist are seeking answers is how a vivacious, attractive woman with such a comfortable life could turn into a suicidal/homicidal fanatic.  The way in which the possible answers are considered in turn opens up a space of unknowability that is remarkable for such an apparently straightforward plot.  To put it another way, the film is so polished in a conventional way that I was unprepared for the degree of doubt and paradox that it embraces.  This is a film that deals with the thorniest issues in a way that is faithful to their inherent complexity and contradictions.

Word is that The Attack has obtained American distribution; it will be interesting to see what degree of controversy and indeed protest that it might attract.