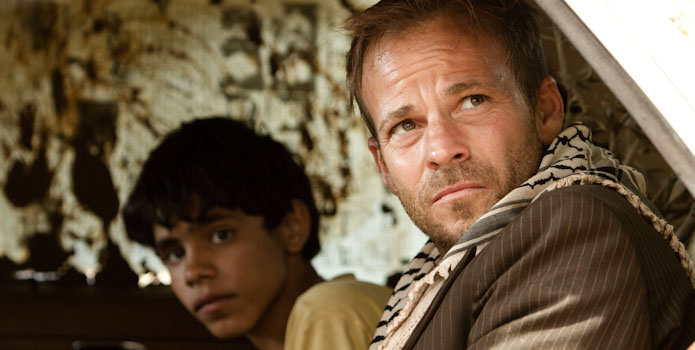 Some quick thoughts about Zaytoun. Criticizing this film feels like kicking a puppy. How can you not enjoy what is possibly the unlikeliest buddy-road-movie pairing ever, when an orphaned Palestinian boy (Abdallah El Akal, who could not be more loved by the camera) and a shackled, captured Israeli pilot (Stephen Dorff, basically smirk-free for the entire movie) make their way across Lebanon’s DMZ south to Israel, during the Israeli invasion of Lebanon circa 1982? And yes, hilarity, pratfalls, the Bee Gees, the World Cup of soccer, and some death & injury are involved. On one level you have to admire the sheer bravura of trying to make a feel-good movie featuring Israeli-aligned Phalangists shooting down a child in cold blood. But if you remember the Seinfeld “no hugging, no learning” rule, after it becomes clear that there is going to be some learning, you know that the hugging is well and truly inevitable.

It’s pretty clear that the film, written by Nader Rizq, a Palestinian living in the U.S., and directed by the Israeli Eran Riklis, has no intention other than to put a human face on both sides of “the Israeli-Palestinian conflict,” as it is so awkwardly if commonly called. If that sounds like a good use of two hours of your time, you could most certainly do worse than this rather entertaining film. But if it’s understanding or insight you seek, best to look elsewhere.