25 Aug so this is film festival madness, again

Posted at 21:26h in Festival Journal by james 0 Comments
Share

Last year I attended TIFF for the third time, but it was the first year that I stayed in Toronto through the entirety of the festival. This left me feeling like some kind of seasoned vet. When I started to plan for this year I decided that I would be more efficient, burn fewer vacation days, and head back home on the evening of day 6.

Based on last year’s experience I reasoned that 80% of the excitement is over after the first weekend anyway, and confidently booked my air travel.

Then came the TIFF lineup announcements, along with the news, that I must have missed earlier, that a new rule was in place to keep non-premieres out of those opening days.

The result: a glut of films on Tuesday and Wednesday (Sept 9 & 10) that I really want to see. Because, yeah, previous screenings at Cannes etc may diminish TIFF’s shine on opening weekend, but they tend to rather increase my interest.  I like all that European stuff, I do. 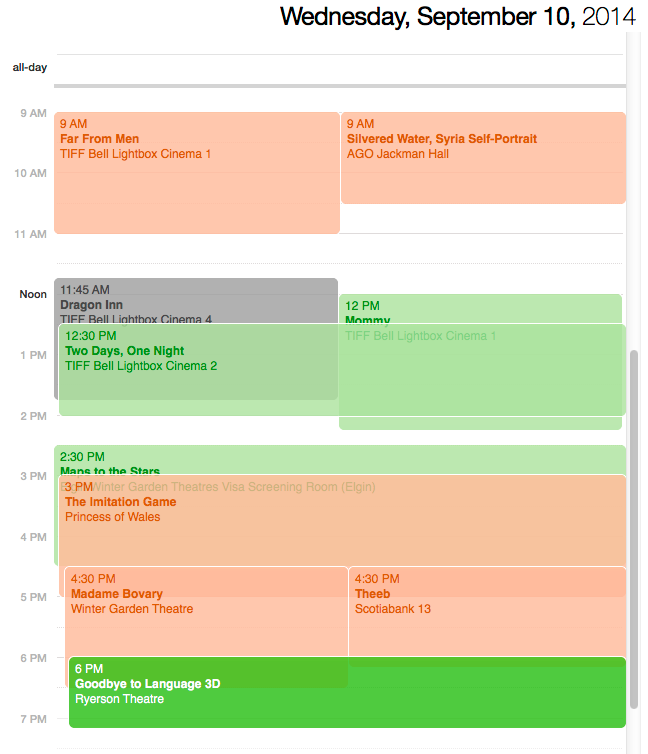 Now add to the mix the added difficulty of figuring out which films are TIFF only, and which I can see at the Atlantic Film Festival after I fly back to my Halifax hometown, and my planning calendar begins to look like this. Black for Cinematheque screenings, orange for TIFF-only new films, green for films that are also at AFF. (Not shown: red for Toronto gala screenings.)

Guess I’ll be rebooking some air travel? But first, on Tuesday, to pick my 3 TIFF galas, and then on Wednesday to pick 5 other TIFF screenings…