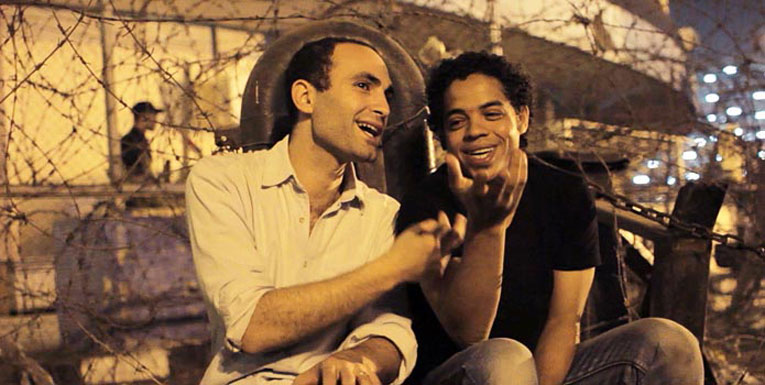 Posted at 21:39h in Festival Journal by james 0 Comments
Share

While it’s been repeatedly commented that the running theme of this year’s TIFF was torture—and indeed, 10 of the 21 films I saw either depicted or referenced it—that didn’t seem nearly as significant to me as a substantial new wave of dissident cinema. While much of the attention in this genre was soaked up by the Bill Condon directed festival opener The Fifth Estate, the riveting documentary The Square was the deserving winner of the People’s Choice Documentary award.

The film follows six Egyptian revolutionaries from the February 2011 through to the deposing of Morsi—at the post-screening Q&A the Cairo-raised/Harvard-educated director Jehane Noujaim confessed that the film was only finished its edit and delivered the day before the festival. A few subtitle typos and errors are the only evidence of the haste with which it was finished—the film is a thorougly slick, smartly crafted adrenaline rush that literally has the freshness of last month’s headlines. I will not soon forget the passion of the young secular activist Ahmed Hassan, one of 6 Egyptians whose story the film follows, but equally moving and charismatic is Magdy Ashour, who is loyal to the Brotherhood but even more loyal to his conscience.

Of the five films considered here the one that looks most multiplex-ready in terms of production values and genre chops is the suspense thriller Omar, which tells the story of a young Palestinian resistor whose participation in the cold assassination of an Israeli soldier leaves him caught between the resistance, the security police, and the young woman that he loves.  The film was made with mostly Palestinian producers and crew and invites comparisons to last year’s masterful Ziad Doueiri film The Attack, but is perhaps rather less nuanced and more about skillfully ratcheting up the suspense all the way to a shocking climax. And of the many TIFF screenings depicting torture this is probably the only one where the torturers are Israeli security police.

The film depicts a kind of Syrian nation in microcosm—a number of people rooming together in one house, Muslim and Christian, working people, intellectuals, artists, even a soldier. The group are threatened by the civil war happening all around the house—Malas finding the suitable metaphor for depicting both an idealized Syrian community—and human lives themselves—under duress.

Permission to shoot was obtained by submitting a false script to the Syrian film authority.  At the post-film Q&A, Malas was asked how the shooting license was policed, and he explained that the resulting film must match the approved script in order to receive a second license—a license to distribute. In the case of this film he never intended or expected to receive the second license—his only hope is that audiences around the world will get to see what Syrians cannot. In order to protect the safety of the actors and crew they never received copies of the script.  The mostly amateur cast were given pages of script on the day of shooting and expected to learn their lines on the spot.

While this approach makes for some rough edges with the performances, the same can’t be said of the brilliant cinematography by Joude Gorani, which is quite simply visually stunning.

The most restrained and low-budget-looking film on this list is Mohammad Rasoulof’s Manuscripts Don’t Burn, this one also shot in secret, but in Iran. The title, a nod to 1930s Soviet dissident Mikhail Bulgakov, provides a textual link back to previous generations of covertly-produced dissident art.  The film depicts how the Iranian government started using contract killers in the 1990s to assassinate writers and intellectuals under a layer of plausible deniability.  The pacing is slow, the performances extremely restrained, but when the film loops around at the end to retell the opening scene, the payoff offers more than mere plot closure.

The combination of this film and the more brightly-lit but guarded Closed Curtain (described in a previous post) suggests that Jafar Panahi’s This is Not a Film has touched something off—with today’s digital technology, what cannot be filmed with official sanction can be covertly created to a standard that can touch global audiences via the festival circuit and the internet.