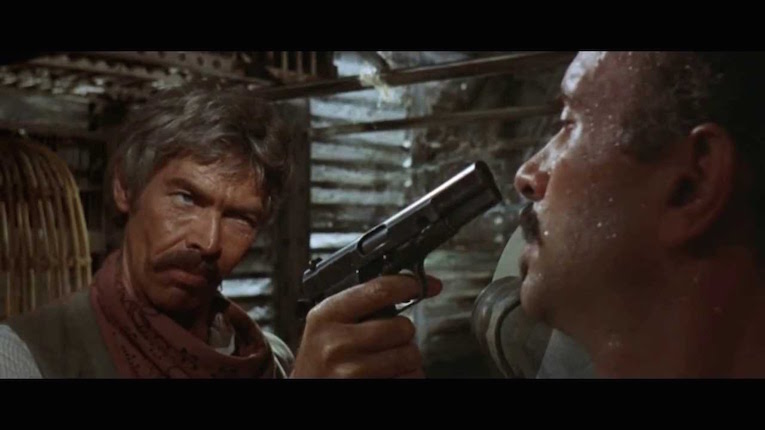 27 Oct unplanned Sergio Leone deep dive (Duck, You Sucker & Once Upon a Time in America)

I’m used to thinking of the category “spaghetti westerns” as a fairly inexhaustible pool of films, so I was rather surprised when it clicked with me recently that the entire Sergio Leone oeuvre is comprised of just six mature films. Long ones, to be sure, and rather more chock-a-block with filmic references than I ever knew until I found myself on a Leone bender this month.

My head was originally turned a few months ago by the fall 2014 release announcement for the “Extended Director’s Cut” of Once Upon A Time in America (itself not a western, of course), which thanks to funding from Martin Scorsese’s Film Foundation, and from Gucci, runs 251 minutes, 22 minutes longer than the previous 229-minute cut. As someone who continues to be interested in film restoration in general, and the work of the Cineteca di Bologna in particular, I blind-bought the new Blu-ray edition on its September 30 release, taking the opportunity to finally watch this film and to have a first experience of it that much closer to the director’s original vision.

This summer had already seen MGM re-release The Man With No Name Trilogy, in an edition that replaces their 2011 release of The Good, the Bad, and the Ugly with a new Cineteca di Bologna restoration. With the fresh flurry of interest in Leone the 2011 Blu-ray release of Once Upon a Time in the West could be had cheaply so I picked that up too. MGM followed up Warner’s release of America a week later (October 7) with a low-priced ($9.97 on Amazon.ca at this moment) Blu-ray disc of Duck, You Sucker, which means that all six Leone masterpieces are now available in high def.

As it comes to us on this budget disc, Duck, You Sucker is sort of a hot mess. It has undeniable allure: it is Grade A Leone, it is all the more enjoyable for being rarely seen and hard to find, it is an evolutionary missing link between the two “Once Upon” films (and in fact it it was called Once Upon a Time… the Revolution in some European releases and that is probably the best title it had, certain much better than, for example, A Fistful of Dynamite). However it is a sub-par release of a damaged film. No further cleanup has been done since the 2007 DVD release, and thus the image contains plenty of visible noise and artifacts. The disc has no main menu, thus the film auto-starts on load, and has no new special features. However it carries with it the special features from the DVD release, including the excellent “Sorting out the Versions” doc, which at least makes it clear why certain transitions in the film really make little sense. The upshot is that the best that could be done with the elements at hand was done, in terms of restoring the film to its theatrical cut. But even the theatrical cut didn’t completely make sense, so in order to create a fully-realized artistically-integral cut of the film it seems unavoidable that someone would have to do what the Film Foundation just did with America and find additional elements and bring them back in.

Does all of that sound like a recommendation? It probably doesn’t. Therefore it’s incumbent on me to say, if you have ever enjoyed any of Leone’s films, you owe it to yourself to see all six of his masterpieces, the flawed ones. Duck, You Sucker, awkward title and all, is a compelling, intense film, and this Blu-ray release at least allows you to see the best-available cut in high definition. Now if you’ll excuse me, watching all six different commentary tracks on five different films hasn’t exhausted my interest in Sergio Leone, so I have to go read Christopher Frayling’s fascinating-looking book about him now.