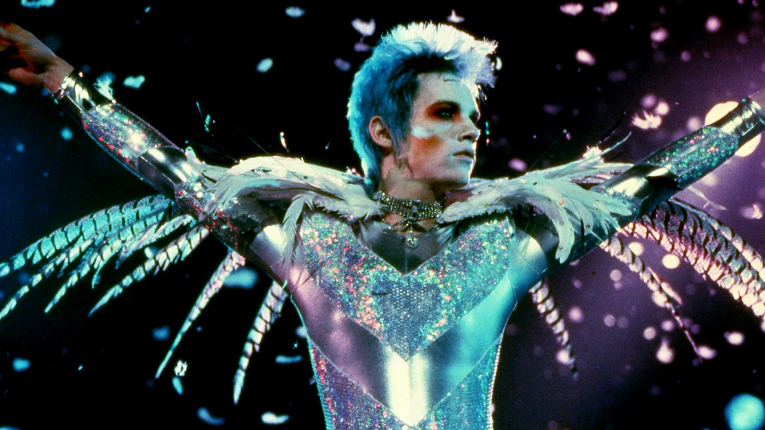 One of two Todd Haynes features that I did not see in theatrical release, Velvet Goldmine is a winning discovery on Netflix, with more than enough glam rock indulgence and rock-opera-esque twists to compensate for whatever it lacks in character specificity. The original songs are stylistically true enough that when we hear the first actual song from the era—T Rex’s “Cosmic Dancer”, nearly an hour in—it blends seamlessly rather than distracting. In retrospect it’s not surprising that the film continues to generate a cult with successive generations of viewers. As the director points out in a recent interview, the fluidity of sexual identity continues to be a subversive, relevant topic.

The other Haynes film to be found on Netflix Canada, I’m Not There, was a happy rediscovery. Sure I remembered that it features six different Bob Dylans, notably Cate Blanchett, Richard Gere, and Christian Bale… but I’d forgotten that we also get Ben “Q” Whishaw as poet-Dylan, and a remarkable performance by Heath Ledger, in another reminder of what a loss he represents, opposite a soulful Charlotte Gainsbourg. The meta-biopic approach holds up really well on repeated viewing, and only lags in the last ten minutes or so, which needs to find individual endpoints for six different Dylans. A persuasive and surprisingly coherent riot of surfaces, the film is carried along by an inspired soundtrack and a number of creative casting choices, including a funny yet weirdly appropriate David Cross as Allen Ginsberg.