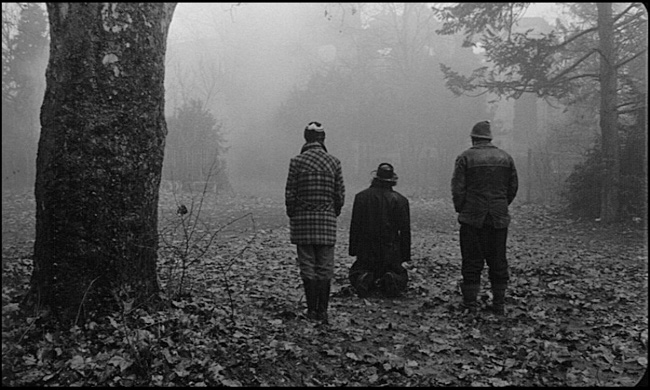 I’m playing catchup with Bela Tarr, now, because just over a year ago I saw The Turin Horse and I haven’t been able to get it out of my mind.  That’s a film that is pardigmatic difficult viewing, gruelling by any measure, minimal, oblique, demanding—so by comparison Tarr’s seven-and-a-half-hour magnum opus Sátántangó is a pleasant surprise.  Yes it is demanding, but simply because it asks something like a full day of your time, and patience with its pace to boot.

However I still feel that watching The Turin Horse before Sátántangó had a kind of spoiler effect on my first viewing of the latter film, which I undertook this week on a single day (into the early evening).  Both films are concerned with presenting a kind of secular and modernist apocalypse.  There is so much thematic and aesthetic overlap that Sátántangó felt very familiar even on first viewing, and if a plot stretched over seven hours won’t make you impatient for a film to get to the point, watching almost the same point being made a second time by the same filmmaker definitely will.

The apocalypse of Sátántangó is minimal but not subtle—just in case we miss the point, some two and a half hours in, one character advises another to read the Bible’s book of Revelation. She specifically uses the alternate title of the book, “Apokalipszis” (“Apocalypse”) and not “Jelenések” (Revelation).

I completely understand how Sátántangó would come as a cinematic, um, revelation to someone watching a Tarr film for the first time, but for me it couldn’t quite deliver the same jolt.  However one thing that Sátántangó has on offer that The Turin Horse lacks is the compelling figure of Irimiás, played by Mihály Vig. He is a combined anti-Christ and false Muhammad who provides the film with a focal point and an admittedly slender thread of political theory.

The way that people follow leaders who promise a better life in the face of all common-sense evidence to the contrary forms the tragic framework for the story, and it is safe to say that Tarr sees the reasons for this as springing from within human nature, rather than imposed from without. Over the six years that (so I have read) this film was being made, Hungary began its first round of economic privatization, which would culminate with unpopular austerity measures a year or so after the release of the film.  In this context it is more than possible to see the film as meet-the-new-boss, same-as-the-old-boss prophetic howl.

Apart from the occasional, inevitable moments of boredom (even a cinematic masterpiece can’t stay utterly gripping for all of seven hours), two moments knocked me outside of the film.

One was the memorable shot of the men walking down the road as a powerful wind swept piles of debris along behind them. Jonathan Rosenbaum says that Bela Tarr is better than Hollywood at creating illusion with things like a wind machine and a rain machine, but in each of the sequences with the men walking in the wind, it is clear that the trees ahead of them and beyond them are not swaying at all. This actually occurs in a later sequence as well.  I found the obviously faked aspect jarring.  I don’t remember having this reaction to the storm scenes in The Turin Horse.  I can only conclude that Tarr has improved, with age, at simulating storms on screen.

The other was an exchange of funds that happens near the beginning of the film.  Futaki has found out that Schmidt and Kraner plan to keep the money that was (pooled? earned? stolen? received from the government?) by six others in addition to them, including Futaki. Schmidt buys off Futaki by offering to cut him in for a third, along with Schmidt and Kraner.  Schmidt has half of this money on him. Futaki asks for immediate payment. Fine so far. So why does Schmidt divide this half into further halves? Futaki now has 25% of the money.  Does Schmidt expect Kraner to do the same thing? Futaki would then have half the money.  Or does he expect Kraner to make up the additional 8%? In that case how are Kraner and Schmidt going to even things out? I possibly missed some key lines in the minutes that followed as I wrestled with the mental math.

With Sátántangó now such a touchstone of arthouse cinema that it has apparently become a dating/mating criterion, you would think that it would have seen the light of day on Blu-ray by now, but sadly this is not the case.  There isn’t even, in fact, an anamorphic DVD release.  Gary Tooze of DVD Beaver has done a good job of detailing the disaster that is the North American DVD release.

For those who can view European-region DVDs the Artificial Eye release, is definitely preferred, even with (or perhaps because of) the 4% PAL speedup, which shaves at least 15 minutes from the film running time.  Reel-change cue marks are visible as well as frequent visible artifacts. The image is completely uncropped such that rounded corners are often visible along with edge fading especially at the left and bottom.  The downside of this “purist” approach to presentation becomes awkwardly clear in a long tracking shot in chapter 8, following the migrants from behind, up the road to their new commune. The camera lens appears to be obscured by something at the right hand edge, and the fact that this is left in makes it pretty clear that Tarr expected this defective edge of the image to be matted out when projected. On the positive side the image is completely position-stable, indicating a digital frame by frame transfer. However the world still awaits a true-running-time, polished, high-def home presentation for this essential film.